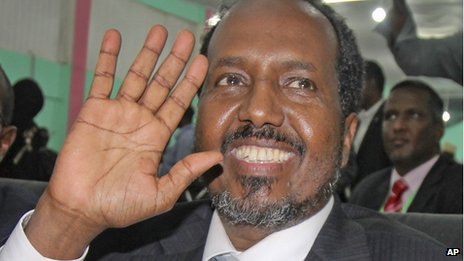 Years of instability left Somalia without a functional government for years

The U.S. recognized the Somali Government for the first time in more than two decades as the country’s president, Hassan Sheikh Mohamud, visited Washington.

The U.S. Secretary of State, Hillary Clinton, said she was “delighted’’ to announce the U.S.’s first official recognition of a Somali Government since 1991.

She pointed to advances made in driving the al-Shabab militant group from the capital and other Somali cities in recent years.

“Somalia’s leaders are well aware of the work that lies ahead of them, and that it will be hard work,” she said. “But they have entered into this important mission with a level of commitment that we find admirable. So, Somalia has the chance to write a new chapter.”

Mr. Mohamud acknowledged the hundreds of millions of dollars in U.S. aid to his country for security and humanitarian relief and pointed to the nations’ common goals.

“We both have common interest and common enemy … we must redouble our efforts to bring peace and stability in Somalia,’’ he said.

Mr. Mohamud also met with President Barack Obama at the White House, with Mr. Obama congratulating his counterpart on his election in September and the establishment of the first representative government in two decades.