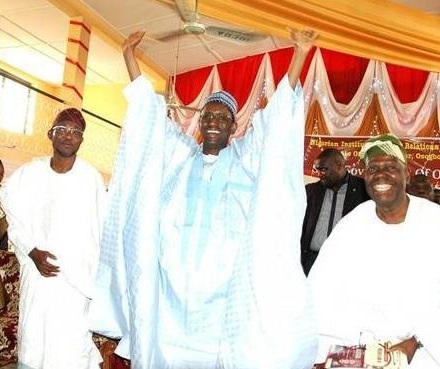 Government and business activities were reduced in the State of Osun on Wednesday as the state chapter of the Nigerian Institute of Public Relations,NIPR, honoured the National Chairman of the ruling Action Congress of Nigeria, ACN, Bisi Akande, as part of celebrations marking his 74th birthday.

Hundreds of people gathered at the event were surprised at the unexpected appearance of the presidential candidate of the ACN during the 2011 election, Nuhu Ribadu, who was present at the Ila-Orangun Town hall of the program.

Osun State is the only state won by Mr. Ribadu and the ACN during the 2011 election and his surprise showing elicited a lot of excitement at the venue.

Mr. Ribadu, who was accompanied by some stalwarts of the party, had praises for Mr. Akande, a former governor of the state. All, those who spoke also paid glowing tributes to the man they all call ‘Baba’.

Mr. Ribadu in his short remarks said he considers Osun as home and Mr. Akande a father.

“Chief Akande is not just a father to me, but to all progressives in Nigeria and we remain proud of him,” he said.

He commended Mr. Akande’s leadership qualities and declared that “it is by the quality leadership provided by our father that I am confident the progressives will assume the mantle of leadership in Nigeria,” he added.

Speaking further, Mr. Ribadu said Chief Akande has succeeded in building the most disciplined political party in Nigeria, the ACN

“Unlike what happens in the PDP, In ACN states today,you don’t see a governor fighting the chairman of the party or the party chairman trying to remove the secretary unceremoniously,” he declared.

“Chief has brought order and stability to the ACN, he is a man of integrity, with fear of God, and for that we are proud of him,” Mr. Ribadu added.
Appreciation to Osun People

Mr. Ribadu also used the occasion to thank the people of the State of Osun for voting overwhelmingly for him in the elections.

“The people of Osun have shown that they can stand by what is right, and that election was a testimony of their honour and dignity.

“I will forever remain grateful and maintain to you that I will never disappoint you,” Mr. Ribadu said while commending  the Governor of the State, Rauf Aregbesola, whom he described  as one of the best governors in the country for changing the lives of his people positively.

“I am most delighted to call him my brother and friend,” he said.

In his own remark, Governor Aregbesola also  said the state is proud of Chief Akande and also described Mr. Ribadu as a brother, adding that the state remains proud to have voted for him.

“Nigerians could now see that the people of Osun were right, and I declare here that we will do it again and again when the opportunity presents itself,” Mr. Aregbesola said.

The celebrant, Mr. Akande, who also spoke briefly expressed his delight at the honour bestowed on him.