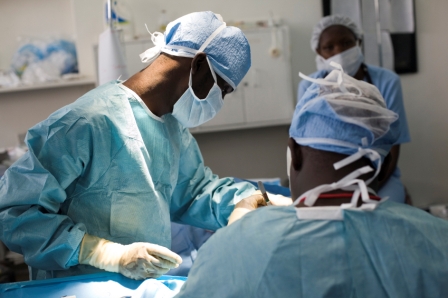 The management of Lagoon Hospital, Lagos, came under fierce criticism at a coroner’s inquest on Wednesday, for their refusal to treat a fatal gunshot victim, last year, unless N1.5 million was deposited.

Access to Justice, a non governmental organization, instituted the inquest after the patient, Benedict Azubuike, 39, died a few hours after he was brought to the hospital.

Last year, four police officers, who were allegedly drunk, shot sporadically into the air outside Monalido Night Club, at the highbrow area of Apapa.

The officers, two inspectors and two corporals attached to the Rapid Response Squad, emerged from the club at Kalakuta Road in the early hours of May 12.

A stray bullet pierced Mr. Azubuike’s left abdomen; another bullet struck Joy Odeyemi on her neck. Both gave up the ghost after they were rushed to the nearby Lagoon Hospital.

The coroner’s inquest focused on the circumstances surrounding the death of Mr. Azubuike who lived for hours after he was rushed to the hospital; Ms. Odeyemi gave up the ghost minutes after arriving at the hospital.

While eye witnesses said that Lagoon Hospital refused to attend to the gunshot victims unless a monetary deposit was made; the hospital’s management insisted to the contrary.

At the inquest on Wednesday, Joseph Otteh, counsel to Access to Justice, stated that Mr. Azubuike, who was still breathing and talking, was dropped on the floor at the hospital as the management insisted for an initial deposit of N1.5 million.

“When Benedict was brought to the hospital, he was kept on the floor for approximately two hours before he got treatment,” Mr. Otteh said.

“Immediately the hospital had a deposit of N700, 000, they found a space (they had said there was no space) for a patient who was haemorrhaging on the floor for two hours,” Mr. Otteh added.

Eye witness accounts after the incident had stated that the hospital demanded for N1 million before they would start treatment – even the club owner’s offer to deposit his jeep as collateral was turned down.

“It was at 5 a.m. and it was difficult to access such funds at that time,” Mr. Otteh said.

The unexpected gunshots, which were fired at 4.30 a.m., sent club attendees and bystanders scurrying to safety.

While Mr. Azubuike and Ms. Odeyemi did not survive; another victim, Darlington, whose knee was struck by a stray bullet lived.

Mr. Darlington said that, in addition to being required to get the N7, 500 hospital card, he was asked to deposit N400, 000 before he could receive treatment.

While testifying before the coroner, Mowa Falase, Acting Medical Director of Lagoon Hospital, Apapa, said that the hospital’s policy does not insist on money before treating such cases.

And for Mr. Azubuike, Ms. Falase said that the hospital did not request for a deposit before treatment.

“We didn’t make it compulsory for a deposit,” she said.

“Hospital policy is to give immediate care to such people,” she added.

Though Ms. Falase was not present on the day of the incident, she said that she “personally” spoke with the doctors and staff who were on duty.

“I found out that as soon as Mr. Azubuike was brought to the hospital, treatment was commenced. He was not required to obtain a hospital card before treatment was started and he did not,” she told the coroner.

“While treatment was going on, one of the people that brought him was asked to give the details we need to fill the hospital card,” she added.

The Acting Medical Director also said that the deceased was kept on the floor when he was brought in due to lack of space; but treatment commenced “there and then.”

“He was taken off the floor when we were able to clear the couch by taking Ms. Joy Odeyemi out of the emergency unit,” said Ms. Falase.

“He was then put on the couch where he continued to receive treatment. He was taken to the Intensive Care Unit at about 9.30 a.m.

Ms. Falase said that the hospital’s emergency room was filled with “drunk club people” and that hindered the performance of the staff.

“The emergency room was full of so many people from the night club, they were in our way and we were unable to do our work,” she said.

“They were rowdy, the staff (on duty), most of them were women. We managed to call the security. Eventually the did manage to push everybody out except the night club owner,” she added.

The coroner, Ariyike Ipaye-Nwachukwu, reiterated that the inquest was not instituted to put anyone on trial or determine culpability.

While adjoining till February 6, Mrs. Ipaye-Nwachukwu told the Lagoon Hospital management to appear with “as many witnesses as possible.”

Mr. Azubuike, a native of Kwale in Delta State, returned from Italy two months before his death. He was survived by a six year old daughter.

“The incident happened quite alright but we do not know if the policemen were drunk. From what I deduced from the information reaching me, the shots were accidental.

“The police officer in question tried to shoot his gun up in the air but his gun jammed and hit his hand thereby bringing the gun down. It was in the process that two people were killed,” Joseph Jaiyeoba, then Lagos State police spokesperson, had said.

The Fulani-Tiv at war in Nigeria, as President Jonathan helplessly looks on (2), By Iyorwuese Hagher