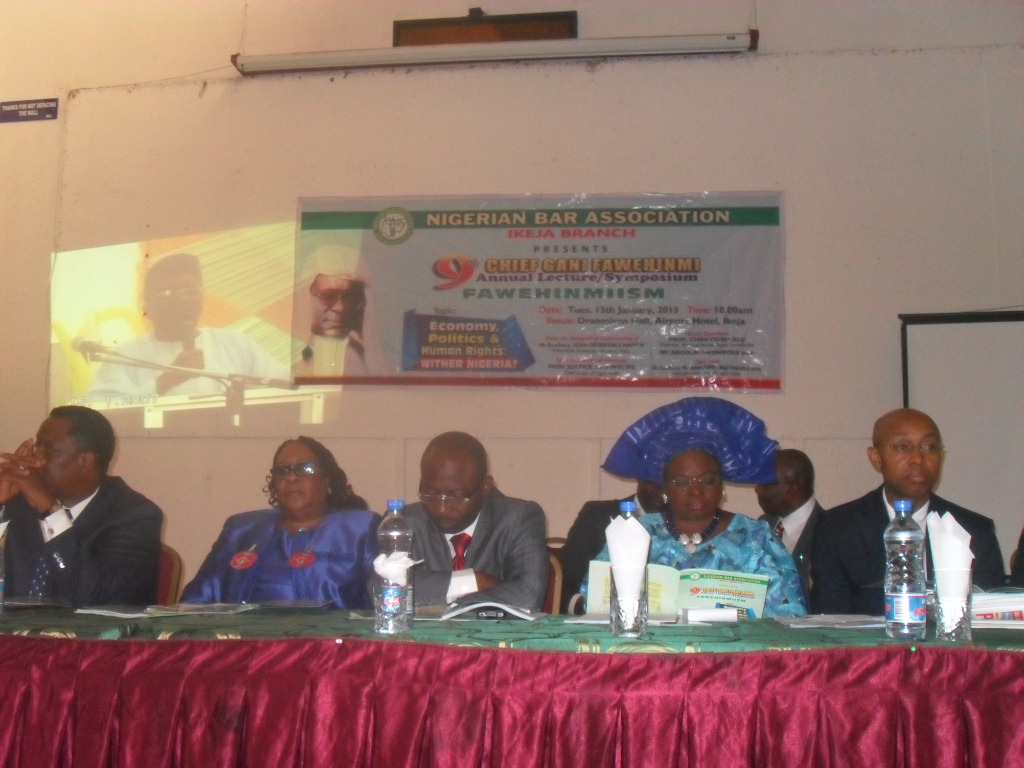 Chidi Odinkalu says that a sovereign national conference is not appealing

The Chairman of the Nigeria Human Rights Commission, Chidi Odinkalu, on Tuesday criticized a group of ’eminent’ Nigerians known as The Patriots, at an annual lecture organized in honour of the late Gani Fawehinmi.

The Patriots, led by octogenarian and Senior Advocate of Nigeria, Ben Nwabueze, have been at the forefront of a campaign for a national conference in the country.

But Mr. Odinkalu, who reiterated that the national conference does not appeal to him, accused the group of being part of the problems with Nigeria.

“I love Ben Nwabueze. I love Chief (Ladi) Williams. But I think ‘The Patriot’ was a misguided idea…

“I’m not making any allegations but if Ladi Williams and The Patriot are going to lead me, I want them to come out and confess how they ran the country down when they had the chance,” said Mr. Odinkalu, a guest speaker at the symposium.

“I’ll never surrender myself to a Chief Williams. Those Patriots are part of our problems,” he added.

Mr. Odinkalu also took a swipe at politicians as well as lawyers both of whom he said had not lived up to expectations.

“Since 1963, we lost an accountable judiciary, and with a police force that doesn’t work, we are in a difficult situation. Therefore, the politicians think they can buy the judiciary and the senior advocates too,” Mr. Odinkalu said.

“In Abia State, they drove away all non-indigenes from their civil service, people who had spent 30 years in the service, we all kept quiet.

“Our children paid different school fees from those who are ‘indigenes”, we all kept quiet.

“If Nigerians cannot live and transact business in Nigeria irrespective of where you come from, then you are not qualified to be a Nigerian,” Mr. Odinkalu said.

The Human Rights Chief further cited examples of Nigerians whose detribalized lives are worthy of note.

Like the late Bola Ige who titled his autobiography ‘Kaduna Boy’; the late Chukwuma Nzeogwu whose middle name was ‘Kaduna’; as well as a former president who practised “genital democracy.”

“We had a former president of this country who had children from all over this country – Yoruba, Igbo, Hausa, Ibibio…,” Mr. Odinkalu said.

“Gani gave us inspiration to continue in spite of obstacles that appear on the way… The democratization of violence has got to end. And we have got to tell the government to exercise their imagination to end it,” he added.

Another guest speaker, Abiodun Owonikoko, stated that Nigeria has deteriorated to the point where she had become “ceaselessly threatened with self implosion.”

“Democracy is only characterized by participatory governance,” said Mr. Owonikoko, a Senior Advocate of Nigeria.

“What we have not been able to achieve in this part of the world is the power of the populace to hold the government accountable,” he added.

The late Mr. Fawehinmi’s wife, Ganiat, and son, Mohammed, were also in attendance.

Human rights activist, Femi Falana, in his speech faulted the Lagos State Government’s criteria of an indigene being the Vice-Chancellor of its university.

“You can’t have a Lagos State where the Vice Chancellor of the Lagos State University must be an indigene of the state,” Mr. Falana said.

“It is a university, universal. When you do that, you reduce it to a mushroom university,” he added.

In his welcome address, Monday Ubani, Chairman of NBA, Ikeja chapter, described the late human rights activist as one of the greatest Nigerians to have passed through the nation.

“Every decent Nigerian will feel appalled at the rate we have moved economically and politically as a nation,” said Mr. Ubani.

“The truth of the matter is that Chief Gani Fawehinmi is still very angry from his grave that the problems of the country that truly facilitated his demise, instead of abating, is growing monumentally by the day,” Mr. Ubani continued.

“The nation has been denied growth by pervasive and institutionalized corruption everywhere. No institution or agency of government is spared; even the private sector is not innocent,” he added.

Nigeria to deploy 190 soldiers to Mali by Wednesday