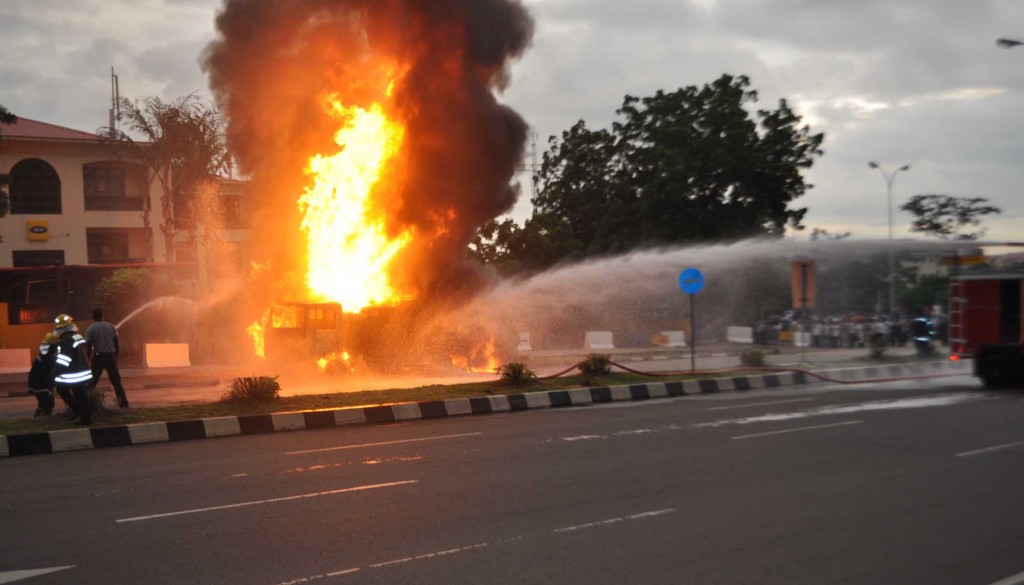 The suspect and his doctor were arrested by the Nigerian police

One of the suspects arrested by the police while escaping the pipeline fire in Arepo, Ogun State, has narrated his ordeal.

This follows the death of no fewer than 30 persons, suspected to be petrol pipeline vandals, in the pipeline fire at Arepo Village, in Ogun State early on Saturday.

The Assistant Commissioner of Police in-charge of the Special Task Force on Anti-Pipeline Vandalism, Friday Ibadin, narrated the confessional statement of the arrested suspect.

He said one of the suspects arrested told the police that many of his mates were killed in the explosion, while others injured might still be alive and “dying in the creeks’’.

Mr. Ibadin narrated the suspect’s account of the incident and how his mother reportedly called in a doctor to treat his wounds.

“He claimed he was in his house, when one Suleiman, his friend, called him that there was a job at Arepo creeks. He asked him to look for a canoe and come with as many gallons of jerry-cans. Shortly after he arrived, he saw argument among the vandals and some began to fight before hearing a gunshot.

“He claimed the next thing was an explosion. He claimed he was lucky that he wasn’t close to the ruptured pipeline. It was in the heat of the fire that he managed to run to his boat, where his mother was waiting. He said his mother called a doctor, who was about taking him to the hospital before they were arrested by the police. “

On the number of persons involved in the incident, the suspect claimed that there were more than 50 men and women, the ASP said.

The police officer also said that the doctor had tried to exonerate himself from the crime.

He (the doctor) claimed he acted “in accordance with his oath to protect life,’’ after receiving a distress call from “a customer’’ for an emergency, the police boss said.

Mr. Ibadin said an explosion was heard at about 2 a.m. and shortly after, a team of policemen led by the Lagos Sector Commander, Onaghise Osayande, arrived at the scene and cordoned off the area. He said the fire was caused by suspected vandals, who allegedly ferried across to the creeks to siphon petroleum products from a ruptured NNPC pipeline.

“Our preliminary investigation reveals that the fire was sparked off by vandals, who were arguing over who was eligible to fetch from the ruptured pipeline. It was in the heat of the argument that one of them accidentally released a bullet that led to several explosions.

“However, operatives of the Inspector General of Police Special Task Force on Anti-Pipeline Vandalism Unit, Force Headquarters Annex, Lagos, who were on patrol rushed to the scene to avert further disaster. It was in the process that they arrested a medical doctor and one of the survivors on their way to the hospital in a jeep.

“The doctor was alleged to be smuggling one of the survivors, who happens to be a vandal, to his private clinic for treatment. In the course of interrogation, we discovered that the survivor was one of those, who allegedly participated in the killing of three NNPC officials in 2012 at same area,’’ Mr. Ibadin said.

The police boss said fire fighters were still trying to contain the fire. He gave an assurance that the police would provide adequate security in the area. He said security agencies were on the trail of other “vandal’’ survivors, who fled the scene of the incident.

Meanwhile, scarcity of fuel looms in Lagos and Ogun States as NNPC has since stopped the flow of petroleum products through the Arepo pipeline, pending the repair of the ruptured pipeline.