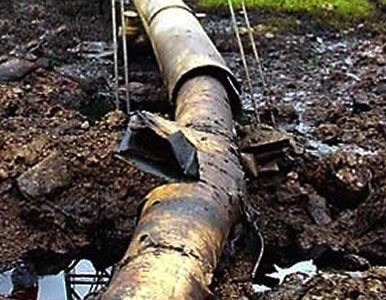 The Ogun Arepo pipeline fire was still raging as at 5:43 p.m.

The fire is still raging as 5:43p.m., on Saturday and casualty figure and property damaged is yet to be ascertained.

However, the Ogun State Commandant of the Nigeria Security and Civil Defence Corps, NSCDC, Aboluwaye Akinwande, said he has contacted the line manager of the Nigeria National Petroleum Corporation, NNPC, to stop supply of fuel to the pipeline to prevent further spread of the fire.

Similarly, the Public Relations Officer of the Ogun NSCDC, Kareem Olarenwaju, said the pipeline exploded after suspected oil thieves vandalised the it. 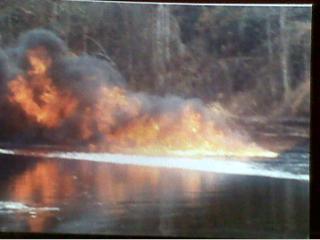 Mr. Olarenwaju said the command mobilised its officers to the scene of the incident to curtail the possible spread of the fire and likely damages.

He said the fire was noticed by NSCDC surveillance team posted to monitor situation around the place,stressing that the fire might have been caused by vandals activities.

Mr. Olanrewaju said the command earlier received a phone call informing it of pipeline vandalism in the area.

“Our combat team were on their way at about 22.15 when the out-break occurred,the team were instructed to move in by commandant Aboluwoye Akinwande for possible arrest.

“However, no arrest was made as the vandals made their escape through Majidun side of the water ways,” Mr. Olanrewaju said.

He said the Corps Commandant, Mr. Akinwande, was there to have on the spot assessment of the situation,and immediately called on the NNPC to stop supply through the route.

“In due course,NNPC have made us to know that the fire will come down gradually,” the corps spokesperson said.

A similar pipeline fire in Arepo also caused by vandals occurred last year leading to petrol scarcity in states supplied by the pipeline. Officials of the NNPC, who went to repair the damaged pipeline, were also killed by the vandals.

Similarly, officers of the NSCDC, were attacked a few days ago by suspected vandals at Arepo leading to the arrest of two suspects.