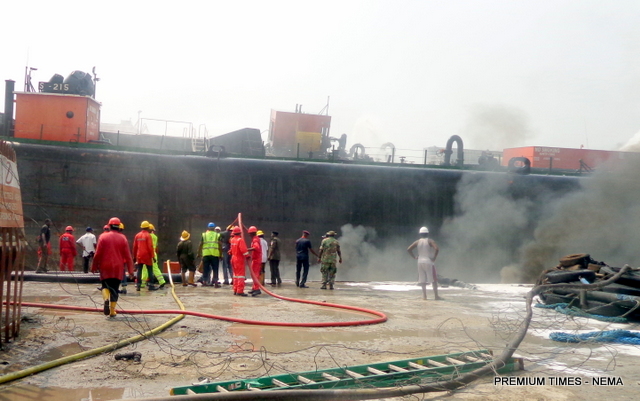 Multiple explosions rocked one of the fuel stations of MRS oil.

The management of MRS Oil Services denied a team of the Lagos State Emergency Management Agency, LASEMA, entry into their facility after multiple explosions rocked the depot on Wednesday.

The explosions, which began at about 11 a.m., and the resulting inferno were contained within one hour, according to fire fighting officials.

About six officials of LASEMA, who arrived at the depot three hours after the explosion and when the fire had been put out, were stopped at the gate and refused entry.

After repeated requests to the MRS security officers to allow them gain access into premises failed; the officials returned to their vehicle and drove away.

The National Emergency Management Agency, NEMA, whose officers arrived earlier, said that shrapnel from the explosion injured 4 workers who were in the premises.

“The explosion was not from the (barge) carrying thousands of PMS (Premium Motor Spirit) but from the attached appliances on the rooftop of the (barge) which was discharging PMS into the tank farm,” said Ibrahim Farinloye, NEMA South-West Spokesperson.

“The combined team of Federal Fire Services, MRS, State, Folawiyo, and others with 12 fire fighting trucks put out the fire after one hour,” Mr. Farinloye added.

MRS stated that they would “conduct an investigation” to find out the cause of the explosion; but a source within the company said that an “error” occurred as fuel were being deposited into metal drums from a barge.

“The ship that discharged the fuel had left. It was the barge. They were trying to put the fuel in the hose into some drums,” said the source, who did not want to be named so as not to be victimized.

A Dangote cement factory inside the compound and the factory offices were razed to the ground by the inferno, according to the source.

Journalists were also barred from entering the depot as the explosions also ripped through nearby buildings shattering windows and cracking walls as well as smashing wind shields of vehicles parked inside the premises.

Customers and touts loitering around the Tin Can terminal took to their heels during the explosions.

“It’s like an earthquake, to be sincere, because even where I was standing, the next thing that came into my mind was to go and jump into that (nearby) sea because I can never allow myself being burn by that fire,” said Mr. Uduji, whose tanker had queued up inside the depot to lift petroleum product.

“Because I believed that this is the end of my own life, the way I saw the explosion. Some guys that were standing beside me, blood was coming out of their ears,” Mr. Uduji added.

Mr. Uduji also said that he ran to the depot’s gate only to discover that it had been locked by the security officers.

“The next thing I wanted to do was to go and jump into that sea because that’s the only option.

“So on my way going to the sea, I saw some people moving under the trailers, because those trailer drivers had abandoned their vehicles and ran outside and everywhere had been blocked.

“We were passing under the trailers, looking for our way till we get to the other extension, that was the only way we were able to go out,” said Mr. Uduji.

Marco Storari, a Director at MRS, said that casualties had been given “adequate” medical attention.

Mr. Storari declined to comment on why journalists were barred from the company during the incident.

“We thank the National Emergency Management Agency and the fire services whose prompt intervention helped to bring the situation under control,” said Mr. Storari.

“The fire which lead to the explosion happened on the water front and the cause is not yet known. I like to say that there was no operation going on at the time the fire started and we will have to conduct an investigation to find out the cause of the fire,” he said.