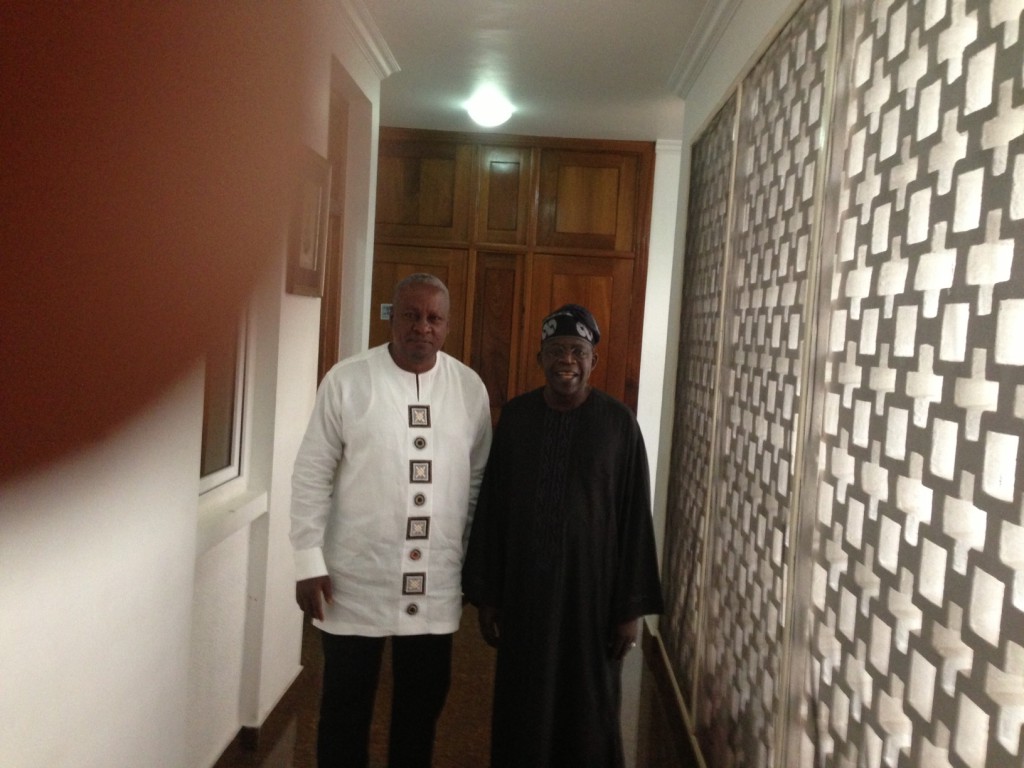 Bola Tinubu at the residence of President of Ghana, John Mahama, to congratulate him shortly after his election victory.

Nigeria should learn about elections from Ghana, says Tinubu

The Action Congress of Nigeria chieftain and former governor of Lagos state, Bola Tinubu, has pointed at Ghana’s barely controversial polls as an example for Nigeria and Africa as the West African country inaugurated a new government Monday.

Mr. Tinubu said “Nigeria has a thing or two learn from Ghana with regards to organizing free and fair elections.”

“Our electoral system needs an overhaul. Ghana has shown the way. Nigeria and other African nations must follow the lead,” he said.

He said, “Ghana remains a signpost of good governance and democratic values Africa is in dire need of”.

Mr. Mahama’s election victory is being contested by the opposition New Patriotic Party.  Members of the party boycotted the ceremony.

Mr. Mahama took the oath of office before regional heads of state, dignitaries and tens of thousands of citizens promising not to let his country down.

“There is a torch that is passed from one era of Ghanaians to the next.  It is fragile and as irreplaceable as any family treasure,” he said. “…That torch is now in our possession …It is doing our best that we can make Ghana its best… I will do my best, I will give of my best and I will ensure that my actions make a positive difference in the lives of Ghanaians.”

Mr. Tinubu, a key opposition figure who himself has endured a swell of criticisms over allegations he influenced election outcomes in his party-controlled South West states, said Ghana stood as a model of democratic practice for Africa and much of the world.

“You have shown that the soil of Africa is as fertile ground for democracy as any other soil,” he said.

He praised Ghanaians for imbibing the new biometric voting system in the conduct of the elections and urged same for Nigeria.

Many believe Nigeria’s electoral system is overdue for a biometric voting system.