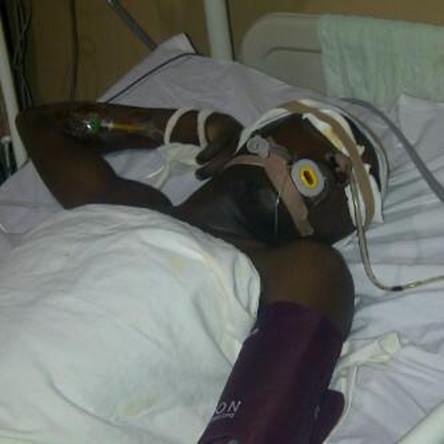 Abdulmumin Abubakar at the ICU of Unimaid Teaching Hospital

The Joint Task Force, JTF, in Maiduguri, Borno State said the student of University of Maiduguri who was shot on Friday was hit by a stray bullet while the JTF and suspected members of the Boko Haram sect exchanged fire.

Abdulmumini Abubakar, a 400 level Adult Education student, was on his way to the University Campus, when he was reportedly shot in the head while riding in a taxi from the motor park; where he spent the night after arriving Maiduguri the previous day.

The spokesperson of the JTF, Sagir Musa, in a statement on Monday said Mr. Abubakar was shot during an exchange of gunfire around 5:50 a.m. on Friday after some insurgents attacked a JTF location.

“During an exchange of fire, a taxi was caught in the cross fire; unfortunately a stray bullet hit one of the passengers who is alleged to be a student of University of Maiduguri,” he said.

Mr. Musa said the student was taken to the University of Maiduguri Teaching Hospital “where he is receiving medical attention and responding to treatment”.

The victim is still at the Intensive Care Unit of the hospital.