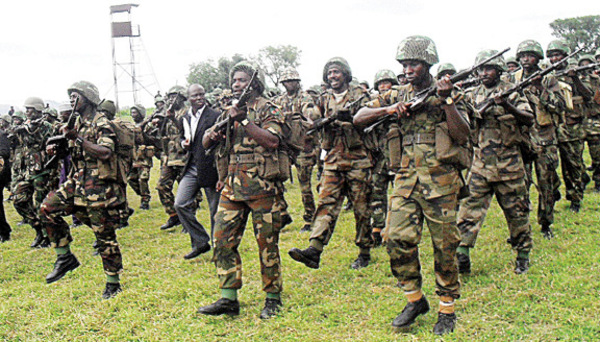 The operation by the soldiers and the ex-militants took place over the weekend.

Soldiers from the 19th Battalion in Okitipupa and Naval officers from the Forward Operation Base at Igbokoda have started a massive destruction of illegal facilities in collaboration with ex-militants in the riverine area of Ondo State.

The Joint Task Force on oil bunkering, and some ex-militants in the area, led by Bebopiri Ajube, concluded a two-day onslaught against the activities of oil thieves in some riverside communities in Ondo, Edo and Delta states at the weekend.

Mr. Ajube had on Thursday conducted reporters round the various illegal oil refineries in the area and the barges being used to scoop crude from vandalized pipes.

About18 local boats and nine barges being used by the hoodlums to carry out their nefarious activities were also burnt by the security agents.

Some residents of the areas complained that the hoodlums had, with their illegal activities, polluted their water and that they now travel scores of kilometres before they could get fresh water to drink and cook.

They also lamented that kerosene produced from the illegal refineries had led to the destruction of many lives and property in the area because of its crude means of processing which made it highly inflammable.

Mr. Ajube appealed to residents of the area to cooperate with the efforts of the JTF and his security aimed at ridding the areas of oil thieves.

It will be recalled that the Operations Manager of Mr. Ajube’s Gallery Security Services Limited, Ebi Molos, had told journalists on Thursday that the firm seized five barges loaded with crude oil at Bolowo town in the Ese Odo Local Government Area of the State.

He put the approximated figure of the stolen crude at 1.65m litres because, according to him, “each of the five barges can fill up at least 10 oil tankers which have 33, 000 litre capacity each.”