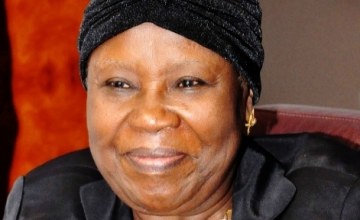 The Federal High Court 4, Abuja,  is about to stir controversy and debate as its presiding judge, Gladys Olotu, is set to deliver judgment in an election petition case which the Supreme Court has said no court has jurisdiction to entertain.

Lawyers on both sides as well as other members of the bar and bench and other stakeholders are watching keenly and waiting to for the outcome of Olotu’s ruling, but, it appears, no matter whom her judgment favours, there will be recriminations and controversy.

Feelers from both counsel to both respondents and defendants in the case indicate that whoever loses in this case that has seen several dramatic turns and twists will head for the appeal court, signaling another round of judicial shadow boxing.

On Tuesday, January 8, Justice Olotu will give her ruling on a case filed by Senators Abdu Umar Yandoma and Ahmed Sani Stores and nine other members of the Congress for Progressive Change, CPC, who contested the National Assembly elections in Katsina State.

The suit challenges the compliance by the Independent National Electoral Commission, INEC, the Senate President and the Speaker, House of Representatives, with a Supreme Court ruling delivered by Justice Walter Nkanu Onnoghen (JSC) and unanimously supported by five other justices on December 16, 2011.

The Case before Justice Gladys Olotu

In the suit instituted pursuant to Sections 68 (1) and 75 (1) and (2) of the Electoral Act 2010, the appellants are asking the court to determine whether INEC had any power to withdraw the certificates of return issued to all the ten plaintiffs as senators (two) and members of the House of Representatives (8) and  whether INEC has the right to issue new certificates of returns to another set of persons as winners in the election.

The plaintiffs also asked the court for seven declarative orders that INEC lacks the power to  “cancel, nullify, review, withdraw, void, invalidate” the certificates issued to 10 of them; that the electoral body lacks the power to issue new certificates to the 5th – 14thdefendants; that the certificates originally issued to the plaintiffs are still valid; and that the Senate President, House Speaker and Clerk, 2nd, 3rd and 4th defendants respectively “ought not to have sworn in the 5th – 14th defendants”.

However, all these issues had been trashed out and decided by the Supreme Court ruling of December 2011 and ought not to be entertained by any law court in the country by virtue of the fact that it is the highest court of the land.

In a case that had gone to the Federal High Court and the Court of Appeal before coming to the apex court, the Supreme Court on December 16, 2011, in a ruling read by Justice Walter NkannuOnnoghen, and unanimously agreed to by Justice Dahiru Mustapha, Justice John Afolabi Fabiyi, Justice Mary Odili and Justice OlufunlolaOyelola Adekeye, decided that the issue in dispute was the determination of who was nominated to contest an election which is the preserve of political parties.

The apex court ruled that it had no jurisdiction in the matter of who a political party nominates to an election and that the Federal High Court and Court of Appeal ought not to have assumed jurisdiction too.

Background to the cases in court

In January, 2011, in accordance with Section 85 (1) of the Electoral Act 2010, which requires a 21 day notice for political parties that want to conduct elections, the CPC national headquarters wrote INEC on Dec 24, 2010, giving notice of its primaries for the 2011 general election.

In the letter, the party said it would conduct all primaries on January 13 and submit lists of candidates to contest the April 2011 elections on January 14. The letter also intimated INEC of the constitution of a committee under Jibril Mohammed Hassan, a retired colonel, appointed to organize the primaries.

The election was held as scheduled on January 13 and Aminu Bello Masari emerged the governorship candidate, Messrs Yar A’dua and Sirika were nominated as Senate candidates and others for other positions. The Board of Trustees of the CPC ratified the list of candidates from Katsina and on January 14, the party submitted the names of the candidates to INEC.

However, Messrs Yandoma and Stores, who were defeated in the primaries, protested the outcome of the election and, supported by the Katsina State chairman of the CPC, the duo formed a group which conducted another primary on January 15 and submitted a fresh list of candidates for CPC to INEC on January 16. INEC rejected this list because the national headquarters had submitted a list to it and the fresh one came a day later that stipulated in the timetable. In fact, voter registration had already started by the time the Yandoma group gave its own list to INEC.

To fight INEC’s rejection of their list, Yandoma, Stores, Senator Yakubu Lado and 42 others sued the electoral body at the Federal High Court, Abuja. Joined in the suit were the CPC, its national chairman, Tony Momoh and Mr. Masari, its governorship candidate.

In his ruling on the matter on Jaunary 15, 2011, Justice Abdu Kafarati of the Federal High Court, Abuja upheld the arguments of the plaintiffs and granted their prayers, observing that “the plaintiffs have sufficiently proved that they are the candidates of the CPC IN April 2011 general election.”

Holding that there was nothing to show that any other primary election was conducted by the CPC in Katsina State, Justice Kafarati granted all the declarative and injunctive orders sought by the plaintiffs.

Based on this court ruling, Yandoma, Stores, Lado and others contested the elections on the platform of the party and interestingly many of them won their seats, including the three senatorial seats.

However, the CPC went to the Court of Appeal sitting in Abuja to contest the Federal High Court ruling. In the suit filed by the party, Masari and Momoh, on February 3, 2011, the plaintiffs asked the court to determine four issues and grant 12 declarative orders.

The orders which the plaintiffs sought included declaration that its candidates be recognized as duly elected to represent the party, an order of perpetual injunction restraining the 1st and 2nd defendants  from presenting any other names to INEC for the election and an order of mandatory injunction compelling INEC to place its own candidates on the ballot.

In its ruling delivered on April 20, 2011, the Court of Appeal upheld the arguments of the CPC and consequently set aside the judgment of the Federal High Court. In a unanimous decision delivered by Justices Mohammed Lawal Garba, the court held that by the provisions of the Electoral Act 2010 (as amended) and the 1999 Constitution, the party at the national headquarters is the one statutorily empowered to organise primary elections, not any of its branches. The court averred therefore that the Katsina State Chairman of the CPC cannot usurp the powers conferred on the National Executive committee of the party.

“The issue of who should be a candidate of a political party in an election is an intra party matter which should be determined by the rules, constitution and provisions in the Electoral Act”, the court noted, adding that a court would only be involved ”where the provisions in the Electoral Act or the party’s constitution has not been complied to”.

The court held further that “the trial court was wrong in relying on the primary elections of 15 January, 2011 to hold that the 1st to 43rd respondents have sufficiently proved that they are the candidates of the CPC in Katsina State for the April 2011 general election. The decision of the trial court was not based on the overwhelming documentary evidence that the 13th January, 2011 primaries were sanctioned by the Board of Trustees of the appellants”.

Significantly, the appellate court held that “The primary held on 13th of January, 2011 was properly conducted in accordance with electoral laws: and that “the grant of injunctive relief in favour of the 1st to 43rdrespondents in the circumstances was wrong.”

It said further that “the trial court failed to determine the questions that were raised in line with the law’.

Based on all these the appeal court set aside the Federal High Court judgment.

Not satisfied with the turn of events, the Yandoma group headed for the Supreme Court to challenge the ruling of the Court of Appeal and the subsequent withdrawal by INEC of their certificate of return and their replacement in the National Assembly.

For the Supreme Court, it decided that the fundamental issue for determination was which of the two lists of candidates emanating from two primaries can be regarded as genuine.

The court agreed with the argument of Ahmed Raji, counsel to INEC, the 5th respondent, that under Section 87 (9) of the Electoral Act where the issue concerns whether there was a primary election or not or which of two different primary elections was valid, then the court would have no jurisdiction in the matter.

On this matter, the court declared that the responsibility of choosing candidates for election was that of the political party and that a court of law cannot perform that role. The Supreme Court ruled that it did not have the jurisdiction to hear the matter; neither did the Federal High Court nor the Court of Appeal.

“In the instant case, the jurisdiction in question is statutory and very limited in scope. On the face of the claim it would appear that the courts have jurisdiction under section 87 (4) (b) (ii), (c) (ii) and (9) of the Electoral Act 2010 (as amended). If the right being claimed by the appellant and in dispute between the parties arose from the primaries of 15th January 2011 alone,” it ruled.

Once there arises a dispute as to which of the two primaries a right of candidature on the parties to represent a political party in an election, the matter is taken outside the purview of Section 87(4)(b)(ii),(c)(ii)(9) of the Electoral Act 2010 (as amended).”

In essence, what the Supreme Court ruled was that the candidate whose names the CPC decided to forward to INEC were the lawfully elected representatives of the party in the 2011 election.

Based on the Supreme Court ruling INEC withdrew the certificates of return issues to Yandoma and Stores along with 8 members of the House of Representative and re – issued same to candidates sponsored by the CPC national headquarters.

Based on the certificates presented to them, the Senate President and Speaker of the House also immediately swore in Yar A’dua and the others.

It is these actions predicated on the ruling of the Supreme Court that Yandoma and Stores and others have gone before Justice Olotu to challenge. The issues raised in the suit before Olotu are the very same previously brought the courts and which the apex court has declared cannot be entertained by them because they lack jurisdiction.

Some legal experts believe that the contention of the appellants is that the Supreme Court did not grant declaratory orders to warrant the withdrawal of the certificates issued to Yandoma and others, but point out that the apex court could not have granted any orders in a matter it has said it has no jurisdiction. Besides, it is said, the court’s ruling could not have been effected without that action being taken.