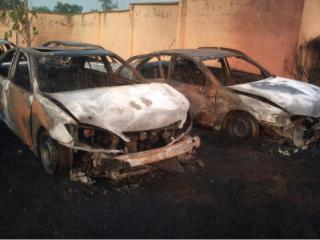 Some of the burnt vehicles

The fire is believed to have been caused by bush burning.

Seven cars belonging to the Ogun State Government were razed on Saturday evening around the governor’s office in Abeokuta.

The fire is believed to have been caused by bush burning around the area.

The bush behind the car park at the Oba complex, which is a stone throw to the governor’s office at Oke-Mosan, Abeokuta, is believed to have been set on fire.

The fire spread across the dried water way into the car park, burning the seven cars completely, before fire fighters arrived.

Reacting to the development, the Deputy Chief of Staff  to the Governor, Shuaib Salisu, thanked God that the fire was curtailed by the timely intervention of the fire fighters before causing further havoc.

He confirmed that the incident was as a result of the bush burning by yet to be identified person(s).

Mr. Salisu cautioned those burning bush in the state to desist particularly because of the current harmattan season.