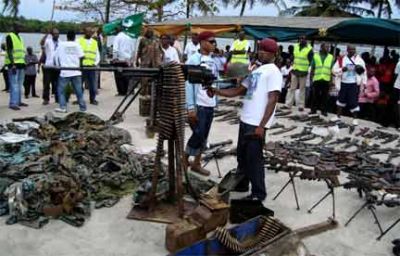 Mr. Kuku gives account of the progress of the ex militants who accepted amnesty since 2009.

The Federal Government has so far enlisted 30,000 former militants in the amnesty programme, Kingsley Kuku, the Special Adviser to the President on Niger Delta Affairs, said on Monday.

Mr. Kuku, who is also the Chairman of the Presidential Amnesty Programme, gave the figure in an interview in Abuja.

He said that when the Federal Government proclaimed unconditional amnesty for the ex-militants on June 25, 2009, a total of 20,192 former agitators gave up their arms and ammunition and enrolled for the first phase of the amnesty programme.

Mr. Kuku said that the terms of the amnesty included the willingness and readiness of the agitators to surrender their arms on or before October 4, 2009, unconditionally renouncing militancy and signing of an undertaking to that effect.

“In return, the government pledged its commitment to institute programmes to assist the disarmament, demobilisation, rehabilitation and reintegration of the former agitators.

“At the expiration of the 60-day grace period on October 4, 2009, a total of 20,192 Niger Delta ex-agitators had surrendered large number of arms and ammunition to the Federal Government and accepted the offer of amnesty.

“And pursuant to the letter and spirit of the Amnesty Proclamation, the Federal Government instituted a Disarmament, Demobilisation and Reintegration, DDR, package for those who accepted the offer of amnesty on or before the expiration date,” he said.

Mr. Kuku said another 6, 166 persons were added in November, constituting a second phase of the programme and bringing the number of the persons enlisted in the Presidential Amnesty Programme to 26,358.

The presidential aide said the Federal Government approved inclusion of another 3,642 former militants, totaling 30,000 in October, 2012.

He said that the Presidential Amnesty Office, PAO, is committed to funding the disarmament process of 3,642 former militants, newly enrolled for the third phase of the amnesty programme.

Mr. Kuku also said the purpose of the process is to reconcile the disarmament record of the former agitators in the third phase of the amnesty programme.

“This is because they have surrendered their arms to military formations and security agencies.

“The process is being budgeted for by President Goodluck Jonathan and the Presidential Amnesty Programme is mandated to carry out the disarmament exercise,’’ Mr. Kuku said.

He said that out of the 30,000 former agitators, more than 11,525 had been placed in skills acquisition/training centres, as well as in formal education within the country and offshore.

“Of this number, 4,929 are being trained offshore, while the balance of 6,382 have either been returned to formal education or have been placed in skill acquisition centres within the country.

“Similarly, 6,067 transformed ex-agitators are currently being processed for deployment to reintegration centres (both within the country and offshore) in the fiscal year 2012,’’ Mr. Kuku said.

The presidential aide said that 113 former militants had been assisted in securing employment in maritime, welding and fabrication companies at home and abroad.

He said that Proclad Group of Companies in Dubai, United Arab Emirates, UAE, offered employment to 30 of the 150 ex-militants, who were trained by the Proclad Academy because of their exceptional conduct and performance.

“The Presidential Amnesty Office, in collaboration with the International Centre for Non-violence and Peace Development (ICNPD) secured the employment through a partnership with Proclad Academy,’” Mr. Kuku said.

He said he also facilitated the immediate employment of 40 maritime trainees by the Century Energy Group in Nigeria,’’ the statement said.

“Four welding and fabrication trainees have been employed in Nigeria by Plants and Processing Service Company, while five were offered jobs in South Africa by Ashland Investment Services.

He said that the office was working with relevant partners and stakeholders in the Niger Delta and abroad to employ some of the ex-militants who had successfully completed their training.

Mr. Kuku said the responsibility of the office “is to disarm, rehabilitate and reintegrate the former agitators who accepted the amnesty offer’’.

He urged companies in the Niger Delta to comply with the Local Content Law by employing graduating students under the programme to enable them contribute their quota to the development of the country.

The presidential aide did, however, not give details of the total amount that has been expended on the amnesty program.

There Was A Country: Babatope’s Vindication of Achebe By Ikeogu Oke