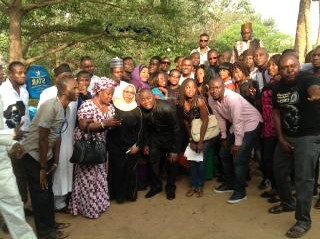 The Alumni of the Government Secondary School, Bwari, have said that they are determined to contribute their quota to the development of the school, one of the oldest in the Nigerian capital, Abuja.

Members of the Old Students Association, formed in December 2006, stated this at the end of their end of the year meeting on Saturday in Abuja.

The Chairman of the caretaker committee of the association, Adebowale Taiwo, said the school contributed in no small measure to the success of its old students.

“The school contributed in making us what we are today, and we are committed to appreciating that. Our school was best among equals, and we must take our rightful place as the most vibrant association to buttress that,” Mr. Adebowale, known as Jante, said.

The alumni leader said 2013 would witness the growth of the association and its contribution to the school.

Also speaking at the event, the Head of the Mobilization Committee, Abdulrafiu Isah, emphasized the need for members’ participation at meetings as “the brotherliness enjoyed during the school days was a pact for life”.

The school was established as a flagship secondary school in 1981 in Kuduru Village, Bwari Area Council to set a standard for high school education.

The association said it has over 25 thousand members among who are the Chairman, House of Representatives Committee on Finance, Abdulmumuni Jibril; another lawmaker, Ismail Ahmed; and the Chairman of Bwari Area Council, Peter Ushafa.