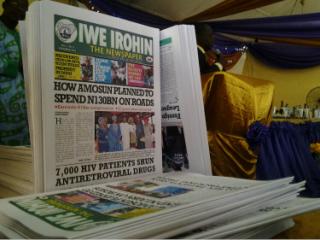 Iwe-Irohin Newspaper on the stand

Iwe Irohin, Nigeria’s first newspaper, was established by a missionary, Henry Townsend in 1859.
The first Nigerian Newspaper, known as Iwe Irohin, was on Friday resuscitated after 140 years of its demise in Abeokuta, the Ogun State Capital.

The re-launch took place at the Press Centre, with dignitaries in attendance expressing their joy over the resuscitation.

The 32-page tabloid, which is an initiative of the Nigeria Union of Journalists, NUJ, Ogun State Council, was reviewed by Adegoke Raufu, the Head of the Department of Mass Communication at the Moshood Abiola Polytechnic, Abeokuta.

The newspaper is printed on pure white bond of 60 gram thickness. Eight pages of the paper are presented in full-processed colours, while the remaining 24 pages are in black and white. The news pages run in six columns, while interviews and features pages are run in four columns.

The reviewer noted that Iwe Irohin is a good attempt and a commendable effort at re-living the past, adding that it shows the dedication of journalists in Ogun State to upholding the past for the purpose of consolidating the present.

“What is now required of all of us is uniting for the future of journalism practice in Nigeria. For now, we are endangered species,” Mr. Raufu said.

In this remark, Yemisi Fadairo, the Special Assistant on Information to Ibikunle Amosun, the Ogun State Governor, called for a regular media summit, which should focus on the need for professionals to be alive to the responsibilities of taking over ownership of media establishment.

“There is need for a summit to think of how professionals can come up to set up and sustain newspapers, because politicians have hijacked newspapers,” Mr. Fadairo said. “It is not only detrimental to the journalism profession, but also to the nation and democracy.”

Mr. Fadairo noted that only few newspapers in the country are owned by journalists, lamenting that just recently, Newswatch and National Mirror, owned by  journalists, were sold to a businessman.

Iwe Irohin was founded on December 3, 1859, by a missionary, Henry Townsend. It was published bi-weekly, in Yoruba and English language and ran for about eight years, specifically from 1859 to 1867.

A single edition had eight pages in total and while the Yoruba edition was sold for 120 cowries, the English edition cost a penny.

Its pages were usually divided into two columns and had no pictures.