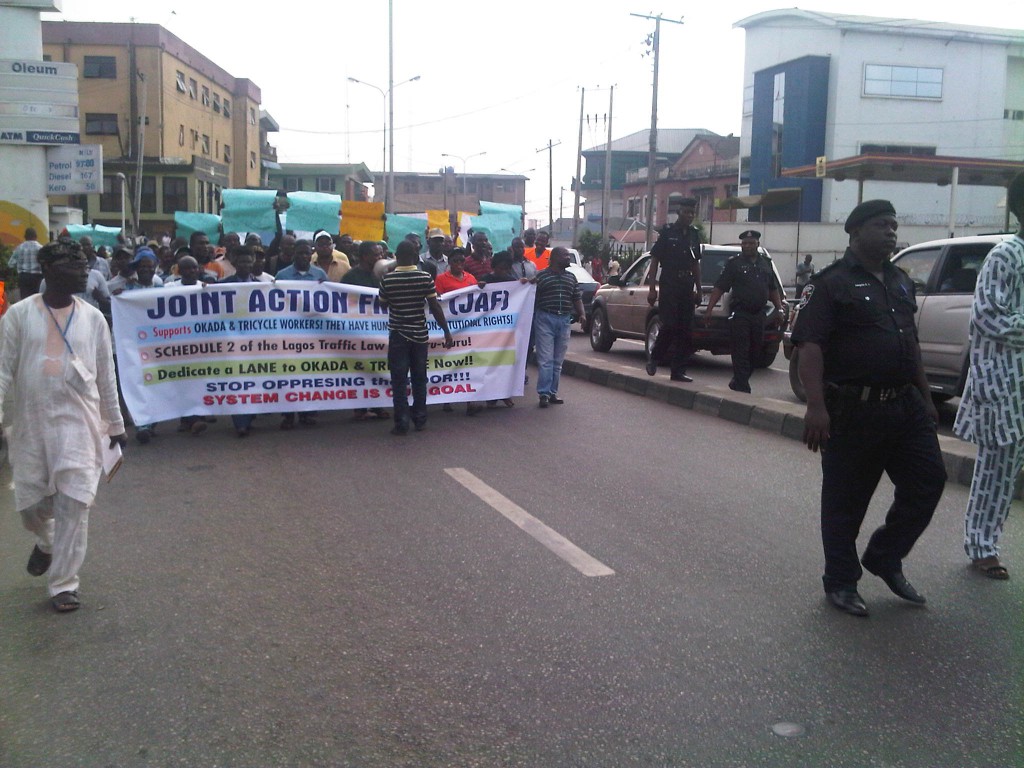 The police disrupted the protest and arrested Mr. Fashina and others.

The planned mass action by commercial motorcyclists, popularly known as okada riders, in Lagos on Wednesday was short-lived as armed police officers, for the second time in one week, stopped the march.

The motorcyclists, alongside some civil society groups, are protesting the new Lagos Traffic Law which bans then from plying over 400 roads in Lagos.

Few minutes after the protest, police rounded up the leadership of the Joint Action Front, JAF; the organisers of the mass action.

Those arrested and in detention at the Lagos Police Command include Dipo Fashina, Chairperson of JAF and former President of the Academic Staff Union of Universities; Abiodun Aremu, JAF’s Secretary; and JAF’s members Hassan Taiwo, Segun Oladunni, and Usman Oloyede.

A Deputy Commissioner of Police, Babatunde Sobulo, who ordered the arrests, said that the organizers “lack the right to hold the protest.”

A week ago, when the okada riders held a similar protest, Mr. Sobulo led a horde of armed police officers to force the organizers to terminate their peaceful procession.

As early as 8 a.m., a team of police officers armed with AK47 rifles, had arrived outside the Nigeria Labour Congress secretariat, and parked their patrol vans.

By the time the procession began, two hours later, the police officers had numbered more than 50; all of them walking in front of the placard-bearing Okada riders.

Traffic along the ever busy Ojuelegba road was also ground to a halt as the procession, numbering in hundreds, occupied an entire lane of the road.

Dipo Fashina said that the Nigerian constitution provides every citizen the right to job, food, and security.

“We must resist the law. Rich people, they ride cars; and their children, they kill people every day; they don’t ban them. That is class injustice. This is a fight for poor people, not Okada people alone,” Mr. Fashina added.

After an initial argument, along Ojuelegba road, between the police and the organizers of the protest; the officers moved forward to the Ishaga junction of the road to form a wall.

“You cannot exceed this point. You have to go back,” said Samuel Orisakwe, a Divisional Police Officer.

The protesters acquiesced, retreated, and headed straight to the other end of the road, at the former Yaba Railway market, chanting and dancing solidarity songs as well as to belts of the late Fela’s music.

The police officers raced after them, catching up with the marching crowd at the Yaba Railway intersection, and ordered them to stop.

Another protracted argument ensued between the police officers and the organizers.

“We have a long battle to wage. Next time, nobody will stop us,” Mr. Aremu told the crowd.

“When we are going to hold the mother of all rallies, nobody will work in Lagos.

We will limit our rally places today so we don’t expend all our energy because it is a long drawn battle,” he added.

Mr. Aremu and the other protest leaders were arrested shortly after the protest ended.