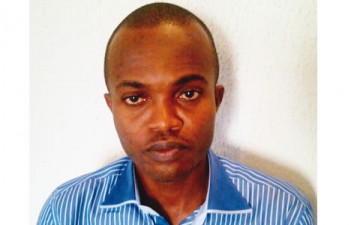 State security agents in the Southeast state of Enugu blocked a reporter from filing a story Saturday evening about the health status of Governor  Sullivan Chime, who hasn’t been seen for several months.

The Committee to Protect Journalists Tuesday condemned this act of crude censorship.

At about 11:30 p.m. local time Saturday, seven plainclothes men accosted Ozioma Ubabukoh, a reporter with private media group Punch Newspapers, at the entrance of his home in Trans-Ekulu in the southeastern state of Enugu, according to local journalists and news reports.

Mr. Ubabukoh told CPJ the men identified themselves as agents of Nigeria’s State Security Service (SSS) and seized his telephone before ordering him to take them into his home. Two of the men threatened to “rough him up” if he didn’t cooperate, Ubabukoh said.

The agents confiscated and searched his laptop and ransacked his home, according to Mr. Ubabukoh.

They told him their mission was to prevent him filing a story about Enugu state Gov. Sullivan Chime, who has not been seen publicly for three months. Other publications reported Saturday, without citing sources, that Chime had died in India.

Mr. Ubabukoh had previously written articles on Chime’s ill health, including one published October 14 which brought the situation to public attention.

State commissioner of information Chuks Ugwoke dismissed that story as “outright falsehood” and claimed the governor was on vacation, but he has still not been seen publicly.

At about 4:30 a.m. Sunday, the agents told the journalist to retrieve his laptop and phone from under his car, Mr. Ubabukoh said.

“State security agents have no business censoring news coverage, and they certainly have no right to use force and intimidation against a reporter doing his job,” said CPJ Africa Advocacy Coordinator Mohamed Keita from New York. “Nigerian officials should publicly repudiate this crude effort to keep an important story from citizens.”

Mr. Ugwoke did not respond to CPJ’s requests for comment, while SSS spokeswoman Marilyn Ogar declined to comment.

Christopher Isiguzo, vice president of the Nigeria Union of Journalists’ southeast zone, told CPJ the union would file a petition with the Police and State Security Service over Ubabukoh’s case.

Ubabukoh had also reported that police officers attached to Gov. Chime’s wife attacked and threatened to shoot Mike Agada, a photojournalist with the News Agency of Nigeria, on October 26 as he tried to take pictures at a funeral ceremony she attended.

Commissioner arrested for failing to appear before state assembly

Sule Lamido and the thorny path to presidency, By Garba Shehu