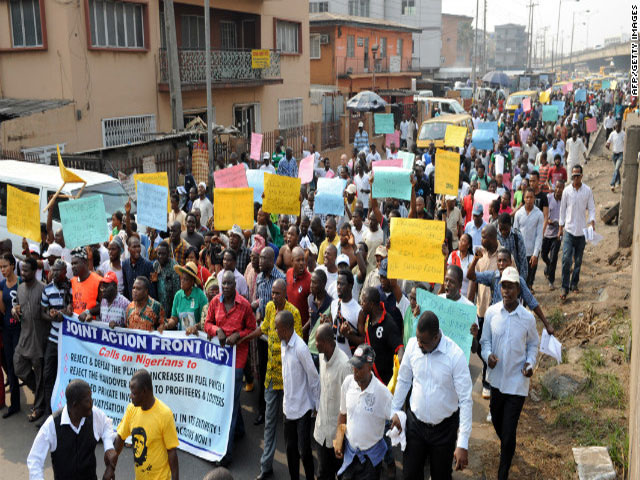 The Plateau workers were chased with tear gas from the government secretariat.

Workers in Plateau have now restricted their protests to the state secretariat of the Nigeria Labour Congress, NLC.

The restriction followed the use of tear gas on the demonstrating workers in Jos on Monday.

The workers embarked on the sympathy strike to force the State Government to pay their colleagues in the local governments the N18, 000 minimum wage and seven months’ salary arrears.

The sympathy strike, which commenced on December 11, had paralysed government and commercial activities in the state.

A correspondent monitoring the strike in Jos and Bukuru metropolis on Tuesday, however, noted that bank customers and motorists still patronised ATM’s and black market outlets for their money and petrol.

Similarly, security vans and Armoured Personnel Carriers as well as fully armed personnel had been stationed at all the points of entry to the secretariat to ward off the striking workers.

Besides, all the 17 Local Government headquarters had been taken over by security operatives.

At the Jos North and Jos South Councils, the gates could not be assessed due to the tight security.

Labour officials have, however, warned that if the strike issues were not resolved before December 19, their action would evolve into a national strike.