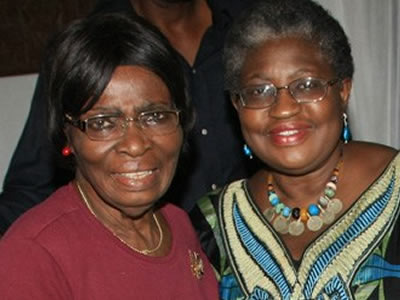 Special Adviser on Media to the Coordinating Minister, Paul Nwabuikwu, said the wife of the Obi of Ogwashi-Uku, Chukuka Okonjo, was released Friday morning, five days after she was abducted from their palace.

“I can confirm that Professor Mrs Kamene Okonjo, wife of the Obi of Ogwashi-Uku, Professor Chukuka Okonjo and mother of the Coordinating Minister for the Economy/Minister of Finance, Dr Ngozi Okonjo-Iweala was released this morning, five days after her abduction.

“The Okonjo Family is full of thanks to the Almighty for this happy development. The family is also highly appreciative of the support and encouragement of President Goodluck Jonathan; the Country’s security services for their excellent operations; Governors Emmanuel Uduaghan of Delta, Peter Obi of Anambra, Rotimi Amaechi of Rivers and other Governors as well other friends and well wishers within and outside government for their prayers and encouragement during a very difficult period. May God bless you all,” Mr Nwabuikwu said in the statement.

He did not offer any further explanation on how her release was secured, nor how much ransom was paid. Prior to the release, speculations were rife that Mrs Okonjo’s abductors had made various demands, including an initial demand for the payment of about N1billion, which later reportedly reduced to N200 million, claims the police said they were not aware.

It was also reported yesterday that the abductors later reviewed their catalog of demands to include a call for the immediate resignation of the Minister from office, apparently because of her principled stance on the issue of the investigation of petroleum subsidy payments to marketers, which has attracted a lot of acrimonious attacks from some affected persons.

Meanwhile, Charles Mukah, the spokesman of the police in Delta State said the command is not aware of the release of the minister’s mom.