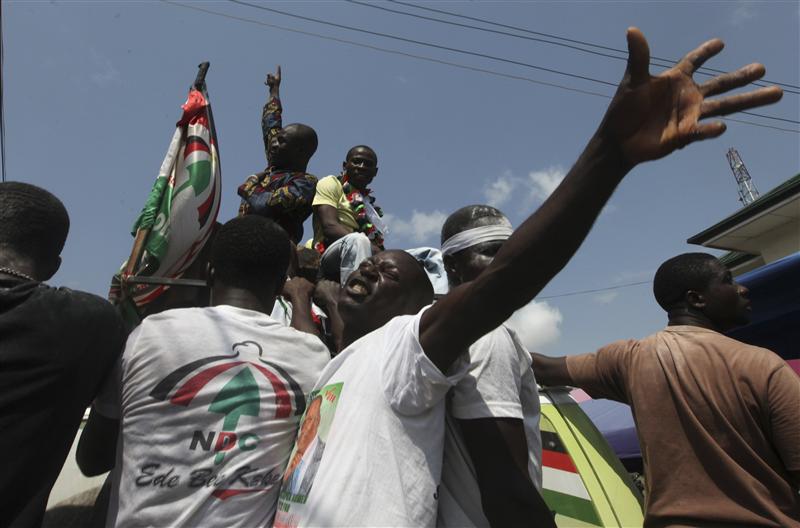 Supporters of National Democratic Congress (NDC) celebrate the victory of their candidate, John Dramani Mahama, on a street in Accra December 9, 2012. Ghana's main opposition party said the country's presidential election had been manipulated, raising concerns about the outcome of the poll in a nation seen as a bulwark of democracy in an unstable region. REUTERS/Luc Gnago

The NPP leadership announced at a news conference that it would ask the Supreme Court to intervene, Accra-based Joy FM reported, based on the evidence of fraud.

Mr. Mahama, 54, of the National Democratic Congress (NDC), won 50.7 per cent of the vote, while his main opponent, 68-year-old Nana Akufo-Addo of the NPP, got 47.74 per cent, according to the country’s electoral commission.

An NPP official on Monday said it had established “a pattern of fraud across the electoral spectrum” that meant “the presidential election should be cancelled.

“We are projecting that about 700,000 to one million votes were added to Mahama’s vote count,” NPP Chief of Staff Bryan Acheampong told dpa at the party’s headquarters in Accra.

Meanwhile, at least 1,000 NPP supporters were protesting the result in a populated area of the Ghanaian capital, according to witnesses. This follows Monday’s smaller demonstration at the party headquarters, where people claimed that their votes had been “stolen.”

NDC General Secretary Johnson Asiedu Nketia, had denied NPP allegations of fraud even before Mahama was officially announced as the winner.

While there were technical and logistical problems, international observer missions said the election was free, fair and transparent.

The failure of the verification devices and late arrival of polling material in some areas, had forced the electoral body to extend the vote from Friday into Saturday.

However, a large majority of its 25-million-strong population struggles with poverty and has limited access to clean water, quality healthcare and education. The country has held six general elections since a constitution came into force in 1992.