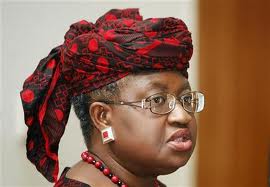 The Minister of Finance, Ngozi Okonjo-Iweala, has confirmed the abduction of her mother, Prof. Kanene Okonjo, by kidnappers.

In a statement Sunday night, the minister said it was possible that those behind the kidnap were the same people who have made threats against her in the recent past.

In the statement, signed by her spokesperson, Paul Nwabuikwu, Mrs. Okonjo-Iweala said it was also possible that “other elements with hostile motives” were behind the kidnap.

“No possibility can be ruled out at this time,” the minister said.

She added, “This is obviously a very difficult time for the entire Okonjo. But the family is hopeful of a positive outcome as it fervently prays for the quick and safe return of the matriarch.”

The minister’s mother was kidnapped at about 1: 30 p.m. Sunday afternoon by eight gunmen who invaded her husband’s palace at Ogbe-Ofu quarters in Ogwahi-Uku, Delta State, whisking her away.

She was whisked away in an Audi Car, witnesses said.

The police in Delta state said they already have information about the kidnappers and have launched a “massive manhunt” for them.

“We have got information that will lead to the arrest of the hoodlums,” Charles Muka, pokes an of Delta state police command said.

Read full statement by the minister below.

Earlier today, Professor (Mrs) Kamene Okonjo, wife of Professor Chukuka Okonjo, the Obi of Ogwashi-Uku and mother of the Coordinating Minister for the Economy and Minister of Finance, Dr Ngozi Okonjo-Iweala was abducted from her home in Ogwashi-Uku, Delta State.

At this point, it is difficult to say whether those behind this action are the same people who have made threats against the Coordinating Minister in the recent past or other elements with hostile motives.

No possibility can be ruled out at this point.

This is obviously a very difficult time for the entire Okonjo. But the family is hopeful of a positive outcome as it fervently prays for the quick and safe return of the matriarch.

How govt pressured me to implicate Babangida, El-Rufai, others in 2010 bombing – Okah