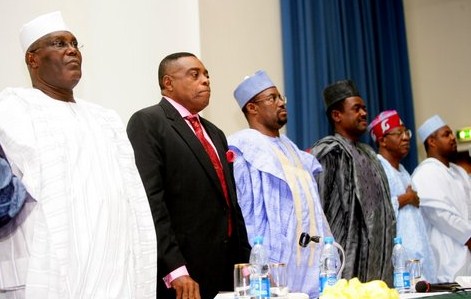 Former Vice President and founder, American University of Nigeria, Yola (AUN), Atiku Abubakar, has proposed the institution of free and compulsory primary and secondary education across the country, with the Federal Government providing support for states that agree to abide by the policy and meet set standards.

He also proposed decentralization that will concede education as a responsibility of state/regional and local governments with the Federal Government, at best, setting standards and providing financial support.

Delivering  the 2012 Shehu Musa Yar’Adua memorial lecture at the Yar’Adua Centre in Abuja on Saturday, the former Vice President advocated the enactment of a law that mandates anyone under the age of 18 to be in school and to hold parents accountable for non-compliance. He noted that such a revolutionary law will ensure that most of our citizens complete secondary school education.

“But it should not be implemented the way we typically go about these things.  A target date should be set to allow for data collection and proper planning.  We need to know the impact that such a policy will have for enrollment, school space and other resources, number of teachers, their availability and training, the impact on the demand for tertiary education and the cost of all of these.

“We should then have a system in place that provides adult education for those who missed the boat in the past but would like to get an education.  This is what serious countries do in order lift up most of their citizens and provide the needed human resources for their economic, social and political development. We should then allow fees to rise slowly in the tertiary institutions to help pay for the badly needed improvements in infrastructure and quality,” Mr.  Abubakar said.

“We do not need a federal ministry of education that is burdened with running secondary and tertiary institutions across the country.  If we have to have one, it should focus on establishing standards and enforcing them with incentives and sanctions as the case may be. State/regional governments should have the freedom to plan and implement educational policies and programmes to suit local needs and changing circumstances.  While a university in the Niger Delta or Lagos may see an urgency in having a world class maritime program, one in Yola or Bauchi may prioritize information technology or agriculture while yet another in Jos or Enugu may prioritize Geology or Metallurgy as the case may be,” he said.

Whatever the case, the former Vice President said, “it should be for local political, bureaucratic, business and educational leaders to make such informed decisions.”

He observed that a healthy competition in the field of education among various states and localities will be a “boon for Nigeria’s development,” adding “they are more likely to quickly adapt their educational processes and programs to suit changing local needs, within the context of the dynamic national and global economy.”

He noted that the rot in our educational system though not an isolated one and has reached crisis-level and demands far-reaching interventions in a methodical, deliberate and sustainable way.

“I propose that we should seek not just to solve the problems for today but do so with our eyes also trained on the future,” Atiku said warning, however, “we must not adopt our usual fire brigade approach.”

Mr. Abubakar advocated for a national discourse on education to determine the expectations we should have of the nation’s schools, envisaged priorities and educational model that is amenable to our needs and realities.

He regretted that the long years of military and quasi-military rule have led to the “abandonment of process and procedures in the formulation of educational and other development policies in Nigeria.”

Bemoaning the near-absence of planning in current development efforts in Nigeria, the former vice-president harped on the need for proper planning when a decision is finally made on what educational policy to adopt for the country.

And in order to ensure the ability of schools to quickly meet their challenges, he called for the restoration of autonomy to local school boards and the councils and senates of tertiary institutions.

My dreams for Nigeria, By Femi Fani-Kayode