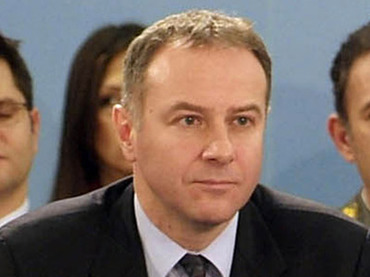 The envoy died after jumping off a platform

Serbia’s ambassador to NATO died Tuesday night after jumping from an airport platform in the Belgian capital, Brussels, in an apparent suicide, media and diplomats said.

The reports said Branislav Milinkovic was chatting with colleagues in a multi-story parking garage at the airport when he suddenly strolled to a barrier, climbed over before flinging himself to the ground below.

The incident happened at around 6 p.m. local time (17:00 GMT). The Serbian foreign ministry confirmed Mr. Milinkovic, 52, had died, but did not give details, the BBC reports.

Immediate motives for the death were not established.

But one diplomat is quoted in the media as saying Mr. Milinkovic, had mentioned to colleagues at diplomatic functions that he was unhappy about living apart from his wife, a Serbian diplomat based in Vienna, and their 17-year-old son.

NATO Secretary General, Anders Fogh Rasmussen, said in a statement he was “deeply saddened” by the news.

“Ambassador Branislav Milinkovic was a highly respected representative of his country and will be missed at NATO headquarters,” Mr. Rasmussen said.

Colleagues at NATO said Mr. Milinkovic had a good sense of humour and was down to earth.

Earlier on Tuesday, Mr. Milinkovic had seemed “completely normal, talking to journalists in the corridors of NATO,” a Serbian journalist in Brussels told the AFP news agency.

Emergency services were called to the scene, but were not able to revive Mr. Milinkovic, sources at Brussels airport were quoted as saying.