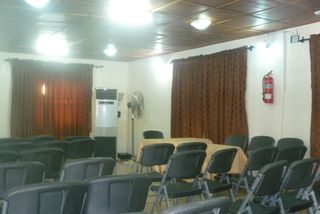 The sum of  N2.2 billion will be used for the construction of a new Presidential Banquet Hall in Abuja as the present hall, the Federal Government says, is not befitting the presidential residence.

“We notice that it is inconvenient, it is not in tandem with what is outside the country, even smaller countries have better Banquet Halls near the Presidential residence,” the Minister of Federal Capital Territory, Bala Mohammed said.

Mr. Muhammed said that the construction of the Banquet Hall, a 150-seater has been awarded to Julius Berger Nig. Plc. The minister said Julius Berger was chosen for security reasons and because it is familiar with the Presidential Villa.

“Part of the things we are going to provide there is 150-seater with all the facilities that will cover the work ways, security, Hall conveniences, technical room and press briefing room as destined from this one but that is more and more enhanced,” the Minister said.

The sum of N2. 78 billion was also approved for the resurfacing of some selected existing roads and remedial works on bridges in Garki and Wuse 1 Districts.

Mr. Muhammed said the execution of the project became necessary in view of the fact that the affected roads had exceeded their 15 years average designed live span.

Mr. Muhammad said that the project would be able to generate about 750 employment opportunities during its execution.

According to him, the FCT administration has N400 million in its 2012 statutory budget for the commencement of the project.

The minister said that the Council also approved a Revised Estimated Total Cost, RETC of the contract for the construction of Tank 1 and 6 and Associated Truck Mains for Abuja Water project from N22 billion to N20 billion.

Also briefing the correspondents on the outcome of the meeting, the Senior Adviser on Media to the President, Reuben Abati, said the Council approved N148.9 million for the conduct of Fiscal Allocation and Statutory Disbursement Audit for the 2007-2011 Oil and Gas Industry Audit.

He said the approval was aimed at ensuring transparency and accountability in the extractive industry.

Also, council was informed by the Minister of State for Foreign Affairs, Viola Onwuliri, of a landmark diplomatic agreement between Venezuela and Nigeria to allow transit and 90-day stay, for holders of official and diplomatic passports of both countries.

The minister noted that the agreement is a show of confidence in Nigeria.

She also conveyed Venezuelan President, Hugo Chavez’s condolence to Jonathan on the death of his younger brother.