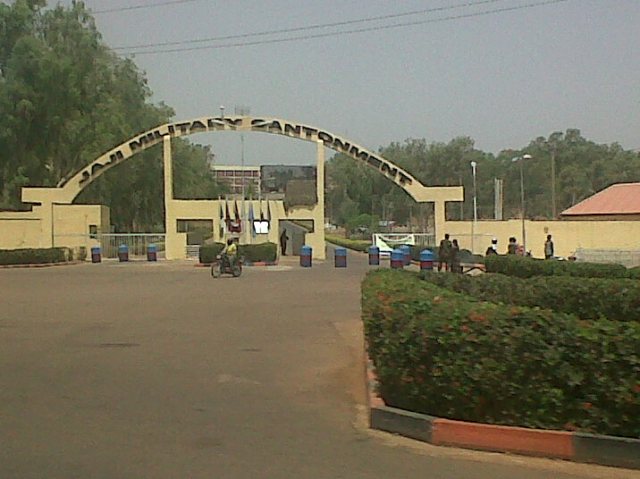 The bombing of the Jaji Military Cantonment surprised many residents of Kaduna, who are accustomed to the military’s heavy security structure at the facility.

The top rated Jaji military training centre attacked on Sunday by suicide bombers, is also home to over 3,000 herdsmen and farmers, an arrangement likely to strain security management in the cantonment, the News Agency of Nigeria reports.

The agency says a large civilian community lives side-by-side the military personnel in the centre where at least 15 people were killed in the attack, and 30 more injured in a twin explosion on Sunday.

Part of the centre is also unfenced, the Senate Defense and Army Committee Chairman, George Sekibo, said on a visit on Wednesday.

Mr. Sekibo said the various communities scattered within the barracks constitute security threat to the military facility and personnel and urged the Kaduna State Government to relocate all civilians living within the Cantonment.

“We have observed that there is a community entirely different from the barrack community who are living on their own, they are not members of the armed forces,” Mr. Sekibo said. “They may attract their visitors and friends from outside and you may not know who brings in what.”

He said the committee had also observed that the cantonment is not completely fenced, adding that this had provided unhindered access into the facility.

How attackers breached security to strike at the heart of the Jaji training facility has stirred concerns and has cast the military up for criticisms.

The nation’s top military commander, Ola Ibrahim, on Tuesday said he was “shocked” at the embarrassing assault.

The incident, followed by another attack on a major police base in Abuja on Monday, humiliated the nation’s security forces amidst a celebrated claim of vital wins the forces posted over insurgent group, Boko Haram. The Joint Task Force placed bounties on the group’s leaders last week.

Two cars targeted St. Andrews Protestant Church at the Jaji Military Cantonment, detonating explosives one after the other in an attack that left more than 30 others wounded, according to the military.

The attack surprised many residents of Kaduna, who are accustomed to the military’s heavy security structure at the facility.

“It is not easy to enter Jaji just like that whether it is Sunday or not, you have to have an ID that shows you either live there or you have clearance to enter,” a resident told PREMIUM TIMES.

Mr. Ibrahim said the military will be clear with a response only after an immediate investigation he announced Tuesday.

“That will determine the next line of action by the Defence Headquarters in the next few days,” he told journalists.