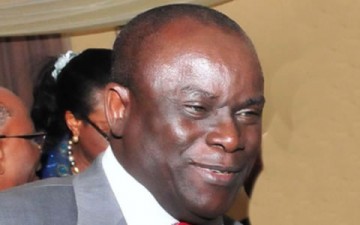 Angry minister yells at Reps before storming out of meeting

The lawmakers said the minister is fond of disrespecting them.

A furious Minister for Science and Technology, Ita Bassey-Ewa, bawled at lawmakers pressing him for clarity with his presentation, Tuesday, at a stormy session that ended with the minister being ordered out.

The Representatives have long complained about the minister’s conduct during meetings with the House Science and Technology Committee.

Tuesday’s was a bit worse.

When asked to provide the percentage equivalent of his ministry’s budget performance for 2012, instead of a detailed analysis, Mr. Bassey-Ewa, a professor of Nuclear Physics, demurred after a brief attempt.

The committee’s chair, Abiodun Akinlade, accused the minister of being disrespectful to the committee, recalling his similar refusal to provide the percentage performance of his ministry when the committee visited on oversight months back.

Responding to the Chairman’s comment, the minister yelled, “We are prepared; we are prepared. You can see that I have been trying to compute the percentage.”

When cautioned that he was before a committee which is an extension of the House, the minister replied that he had been screamed at first by a lawmaker.

Lawmakers later asked the minister to leave for another session when he would possibly appear better composed.

Mr. Bassey-Ewa stormed out of the venue angrily leaving behind the ministry’s Permanent Secretary, Rabi Jimeta, who offered profuse apologies and pledged to provide needed figures.