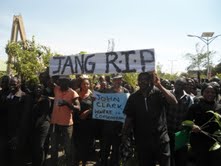 Plateau lawmakers jump over fence to escape lynching by workers

The Speaker of the Plateau State House of Assembly, John Dambwan, and other members of the House, Tuesday, escaped being mobbed by local government workers in the state.

The aggrieved workers have been on strike for about seven months over the non implementation of the N18,000 minimum wage.

At about noon, hundreds of local government workers in Jos North Local Government Area besieged the Assembly with the aim of compelling the government to pay their entitlements, but the lawmakers scampered for safety.

Witnesses told PREMIUM TIMES that some members scaled the fence of the Assembly complex in a bid to escape the mob attack. The other members who had not arrived the Assembly stayed away.

The speaker, Mr. Dambwan, and a member representing Pankshin North, Diket Plang, narrowly escaped being mobbed by the striking workers last week. The workers were aggrieved that the lawmakers refused to comment on the matter during their sittings.

Council workers across the seventeen Local Government Areas of the state had embarked on a stay-at-home strike since June this year over the refusal of the state government to extend the implementation of the N18,000 minimum wage to local government staff after approving same for other civil servants.

During the strike, government and Labour, through a committee of eminent elders of the state, reached an agreement on the new wage. The bone of contention, however, is Governor Jang’s refusal to pay the staff for the five months they were on strike, insisting on a “No work, No pay” policy.

Labour, however, said such a policy is a “mere convention” that is not practicable in Nigeria, insisting that the governor must pay the local government workers their full entitlement before the strike is called off.

At the weekend, the commissioner for Local Government and Chieftaincy Affairs, Paul Wai, told journalists in Jos that worker who refused to resume work this Monday would be sacked.

CAF announces date for draws for U-17, U-20 championships