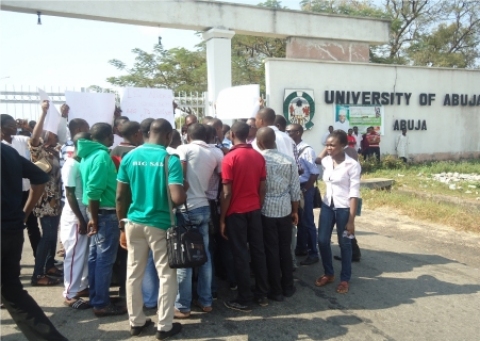 NANS said FG must act in 48 hours or it’ll join.

The National Association of Nigerian Students, NANS, has threatened to join the ongoing protest embarked upon by students of the University of Abuja if the Federal Government does not resolve the crisis in 48 hours.

Protests by students of the university against the non-accreditation of some courses in the school led to the closure of the institution by its authorities on Monday. The students continued their protest, Tuesday, blocking the main Abuja-Lokoja road leading to Abuja city and the airport.

In a statement, Tuesday, signed by its president, Dauda Mohammed, the student association called on the “federal government to call both the University management and the Federal Ministry of Education to order ahead of our planned relocation of the NANS secretariat to University of Abuja in the next 48hours”.

Mr. Mohammed said NANS is disappointed “at the attitude of the Federal Ministry of Education towards correcting the anomalies that has resulted into this crisis.”

The association president said the body “will not allow any student to be illegally denied the right of their studentship as a result of certain incompetence on the part of the authorities of the University.”

NANS, the umbrella body of Nigerian tertiary students, used be a major rallying point in students and workers protest in the country. Corruption and internal strife has however weakened the body as its officials have been known to be stooges of politicians

The protest by the Abuja University students was started on Monday when students from the Faculty of Engineering protested against the non-accreditation of their courses, a situation that led to their inability to sit for examinations, while students from other faculties continued theirs.

An audit report by the Federal Government condemned the poor running of the school, indicting its management of incompetence and corruption. The University boss told PREMIUM TIMES that he was not given fair hearing by the panel and the decay of the university did not start with him.

EFCC, again, fails to appear in court to try Lagos Speaker for corruption

Billions spent by UK on Nigerian education yield no results