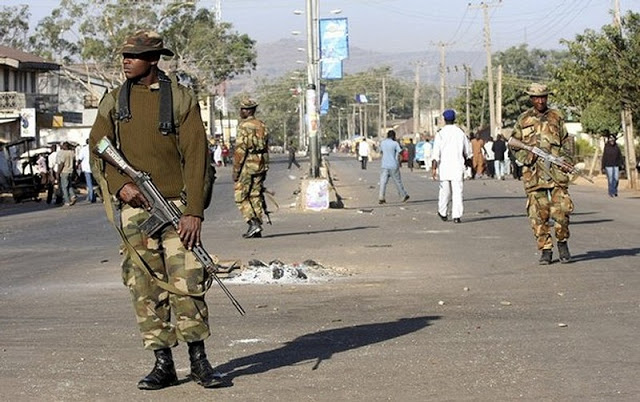 JTF warns the media of sanctions over reportage of military excessiveness.

The Joint Task Force, JTF, battling the terrorist Boko Haram sect in Maiduguri, capital of Borno State, Nigeria, has denied its men were the actors in a short video believed to be filmed by a soldier.

REUTERS reported on Sunday that it was in possession of an amateur video showing Nigerian soldiers shooting unarmed captives in Maiduguri.

The spokesman of the JTF, Sagir Musa, a Colonel, said he has seen the film. He dismissed it as a propaganda by the terror group operating in the region.

“We are professionally guided by a mandate and rules of engagement in the conduct of our operations,” he said. “In our code of conduct and standing instructions, no JTF personnel is allowed to carry video or still camera and cell phones while on operations.”

The video contains clips Reuters’ claims it obtained from a soldier who witnessed the killings.

Reuters explained that in the grainy footage, “a man sits down next to three or four corpses piled together on the roadside. He pleads for his life while soldiers shout at him and a crowd looks on a few metres away.

“He tries to stand up and get onto the back of a pickup truck to the left. A Nigerian soldier shouts “come out”, and drags him off it, shoving him on the ground.

“One of them kicks him in the head. Then he and another soldier aim assault rifles at him. Four gunshots are heard and the man lies still next to the others.”

Reuters said it has another video from the same source, taken after the executions, showing soldiers piling up about 24 bodies in two heaps on the ground from the back of a military truck.

The JTF spokesman countered the video on two grounds. First, he argued that some of the images in the footage were old images which were used to taunt the military years back.

“Picture 1 was used as the cover page of the Amnesty International report that was released on 8 November, 2012. The Task Force is worried that the same picture is again being used by Reuters News Agency that reported the picture was captured two weeks ago,” Mr. Sagir said.

He said a second picture “Picture 2” had earlier been used to taunt a Task Force which operated in the Middle Belt sometimes in 2009.

“Picture 3 is about the vehicle allegedly used by JTF to carry corpses. A look at the vehicle in the film revealed that the JTF has no such vehicle in its inventory,” the Colonel said.

Secondly, Mr. Sagir said the video was staged by the terrorists.

“This film is stage managed and the allegation is baseless, terrorist oriented, spurious and bunkum,” he said.

There have been several reports alleging extra judicial killings by the military posted to the war torn zone to protect civilian. Early this month, Amnesty International, released a report which detailed several abuses by the military in their bid to fight the terrorist Boko Haram sect.

The military always deny any allegation of misconduct in the ongoing fight. Apparently choked by media bombardments with reports of military excessiveness in the war against Boko Haram, the colonel warned the media of ‘sanctions.’

“The Task Force wishes to once again remind the public including the media that it does not condone or encourage indiscipline and anyone found culpable will always be appropriately sanctioned,” Mr. Sagir said.

CAN under Oritsejafor is religious arm of PDP- CPC