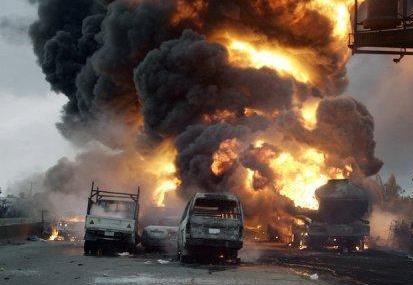 An 80-year-old man was burnt in his house

An octogenarian was among two persons who died on Monday when a petrol-filled tanker crashed, spreading fire to the Ntezi-Amuzu village in Ezza South Local Government Area of Ebonyi.

The victims, Felix Mgbada and Margaret Nworie, were burnt to death in their houses when the fuel spilled from the tanker and caught fire.

The vehicle, with registration number XA 574 CAL, skidded off the road when the driver lost control on the Afikpo-Abakaliki highway.

An eye witness, Emeka Nwafor, said the incident occurred at about 5.30 a.m. because of excessive speed by the driver.

“The driver lost control of the vehicle when it skidded of the road, forcing it to crash,” Mr. Nwafor said. “Some villagers came out to scoop fuel when suddenly the whole place went up in flames,”

He said the incident caused the villagers to flee their homes, adding that two people lost their lives and several others got various degrees of injury.

“The fire that raged from the spill burnt an 80-year-old man in his house while it also trapped another woman trying to flee the scene,” Mr. Nwafor said.

Several buildings and other property worth millions of naira were destroyed in the inferno.

The Public Relations Officer of the Ebonyi Police Command, Sylvester Igbo, confirmed that two persons died in the incident with unspecified number of persons injured.

Mr. Igbo, who spoke in Abakaliki, said that his men were dispatched to the scene to control traffic and carry out further rescue operations.

The Sector Commander of the Federal Road Safety Commission, Ebonyi Command, Jide Femitola, said he had yet to get full details of the incident.

He, however, said that his men were at the scene to ease traffic.

The traffic on the Afikpo-Abakaliki highway was brought to a stand-still as a result of the incident.