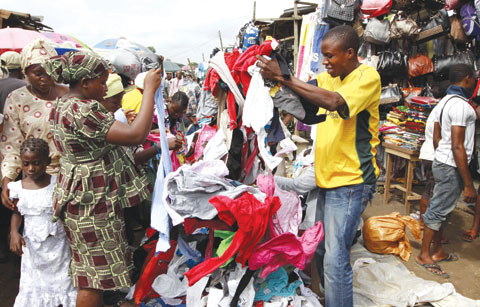 The expert called for proper washing of the clothes.

A medical expert, Elizabeth Uzorji, has said that users of second hand clothes risk contracting candidiasis and hepatitis A, B and C.

Ms. Uzorji said in Jos on Tuesday that such diseases were air borne and could be contracted easily through the constant use of second hand clothes.

“Those that patronise second (hand) clothes do not have the slightest idea of who the first user was. Those selling the wares also do not take their time to wash these clothes very well before marketing them.

“So the lack of adequate information about the negative effects of these second hand clothes among our people has placed users at high risk and a major cause of concern to public health experts,” she said.

The medical expert decried the situation where some women buy inner wears from the second hand clothe dealers and declared that such women were at the risk of contracting vaginal infections.

She advised the people to ensure that the items were properly washed before being used; stressing that such step would go a long way in reducing the chances of such infections.

Ms. Uzorji specifically advised that such second hand clothes be washed with hot water and detergent before being used so as to reduce the chances of any infection.

Second hand clothes are common among many Nigerians and are known by several nicknames as “bend down,” and “okrika.”