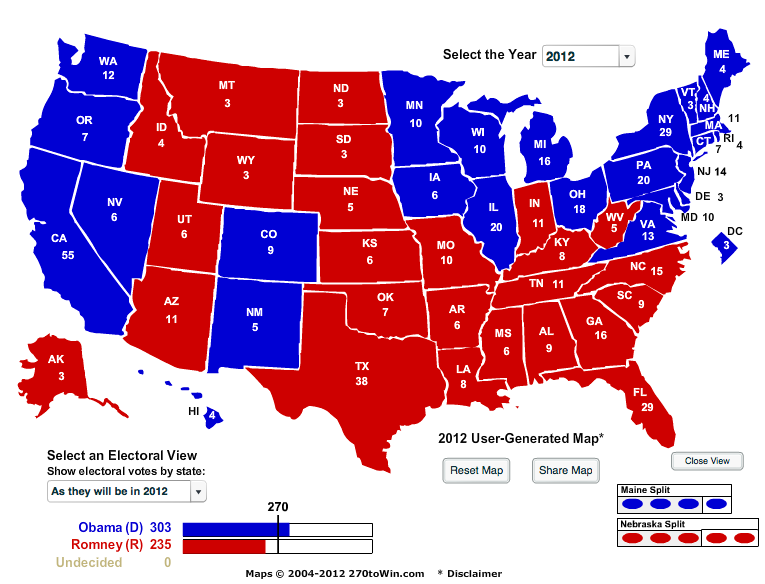 Editor’s Note: In this special Election Day feature, PolicyMic is spotlighting the election predictions of two of our most prominent pundits, conservative Jesse Merkel and liberal Matthew Rozsa. As a twist, we also got them to agree a little friendly bet: Whichever one comes closest to correctly gauging today’s results will have a tribute written about him by the loser. This means that if Barack Obama is the victor, Jesse will have to pen an encomium to Rozsa, while if Mitt Romney wins, Rozsa will have to compose an article singing Merkel’s praises. We did this not only to add a dash of spice to election night, but also to stress the importance of being able to disagree without becoming disagreeable.

Election 2012 Prediction: Before the first presidential debate, Barack Obama was on his way to being re-elected by a comfortable (if not landslide) margin in both the popular and electoral vote. As soon as Mitt Romney was declared the “winner” of that event, however, Republicans began declaring that their champion had turned the race around. While subsequent polls have confirmed this to be the case, they have also showed Romney heading for a defeat comparable to that suffered by Hubert Humphrey at the hands of Richard Nixon in 1968 (a historical analogy to which I will return later). Despite making the battle for the popular vote among the closest in history, Romney will ultimately be thwarted by his opponent’s insurmountable advantage in the Electoral College.

That advantage has been one of the marvels of the Obama campaign. Even during the nadir of the President’s re-election bid (i.e., the period following the October 3rd debate), he still maintained sound, if somewhat diminished, leads in many of this election’s key swing states. Had the political conditions that existed in the fortnight after the initial debate remained unaltered for the rest of the race, Obama would still have picked up Iowa, Michigan, Nevada, Ohio, Pennsylvania, and Wisconsin. When added to the solidly pro-Obama states, these victories alone would have put 277 electoral votes in the President’s column, seven more than the 270 needed to win in the Electoral College.

For this, Obama can thank the underrated strength of his campaign’s ground operation, as well as the shrewdness with which they have tailored his political message based on regional issues (e.g., stressing Romney’s opposition to the auto bailout in states like Michigan and Ohio). That said, the natural vicissitudes of American politics have been just as important to his fortunes. For one thing, nearly five weeks have passed since Romney’s perceived triumph in the first debate, more than enough time for the political momentum he gained from that event to peter out on its own. Accelerating that process was the general impression that Obama had at the very least held his own in the second and third debates, which helped offset some of the damage from the first contest. Finally, approval of the President’s handling of Hurricane Sandy has given him a statistically significant bounce in the polls. As a result, the swing states of Colorado, New Hampshire, and Virginia, all of which were trending toward Romney in the days when the first debate remained freshest in the public’s memory, are now more likely to go to Obama. While Romney has held on to the post-October 3rd leads he developed in North Carolina and Florida, those acquisitions won’t be enough to tip things in his favor. Instead, the President has risen from the rock bottom figure of 277 electoral votes to a probable 303 electoral votes. This is where he stands now… and why I predict that Obama will defeat Romney by 303 to 235 in the Electoral College.

The popular vote has a very different story. Barring a few brief hiccups, Obama was consistently ahead of Romney prior to the first debate; after it, national polls have repeatedly flipped the popular vote back and forth between the two men. This is where the Humphrey campaign offers a useful historical parallel: Like Romney with Obama, Humphrey trailed behind Nixon through the bulk of the campaign until a single game-changing moment roughly five weeks before Election Day caused him to rapidly improve in the polls (due in Humphrey’s case to a widely-lauded speech on the Vietnam War). Had the election been held one week later, it is quite possible that Humphrey would have been among the handful of Also Rans to win the popular vote while losing the election itself (including Andrew Jackson in 1824, Samuel Tilden in 1876, Grover Cleveland in 1888, and Al Gore in 2000). Instead, Humphrey fell behind Nixon in the popular vote by 0.7%, making the 1968 election one of six in which less than a single percentage point separated the two major candidates (the others being in 1880, 1884, 1888, 1960, 1968, and 2000). More importantly, he lost in the Electoral College by 302 to 191 (with 45 electoral votes going to segregationist third-party candidate George Wallace). Like Obama, Nixon had carefully built up a firewall of strength in the one place that, for better or worse, matters most.

My hunch is that Romney will also lose the popular vote by less than one percent, although for the sake of convenience, I’m rounding Obama to 50% and Romney to 49% (as well as giving 1% to Libertarian candidate Gary Johnson, with the rest being split among various third parties). This would leave Obama with the dubious distinction of having the closest popular margin of victory ever received by a re-elected president, a record currently held by none other than George W. Bush (who beat John Kerry in 2004 by 2.4%). Of course, it is also quite possible that Romney will do what Humphrey could not and actually win the popular vote, which would make Obama the only incumbent to win another term without a plurality of the votes cast. Either way, one can safely bet against the Republicans actually winning the White House this year. What journalist Theodore H. White wrote of Humphrey will be just as true of Romney:

“As if by defiance of all political gravity, [he] had converted the downsweep of early autumn into a soaring upward streak that was to miss the rung of the magic trapeze by finger-short margins.”

PS: I refer the conservatives who insist the state polls are systematically biased toward Obama to this excellent article by statistician Nate Silver. All of the conclusions reached here are based on my independent analysis of the polls compiled at www.realclearpolitics.com.

SOURCE: POLICYMIC.COM (We have their permission to republish).

This is FEC agenda for Wednesday November 7