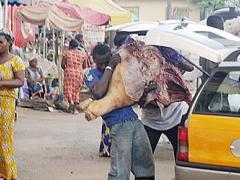 The Federal Capital Territory Administration disdains the mode of transporting meat in Abuja.

Nov. 6 (Premium Times)-The Federal Capital Territory Administration, FCTA, Tuesday banned the use of rickety vehicles and motorcycles, popularly known as Okada, in the haulage of meat in the Federal Capital City, Area Councils and Satellite Towns.

Under a new policy rolled out by the Administration, the mode of meat haulage in Abuja is now through dedicated meat vans and special purpose-made tricycles with meat haulage compartment.

The Minister of State for the Federal Capital Territory, Olajumoke Akinjide, made this known while launching the first phase of the Abuja Meat haulage Programme at Karu Abattoir in Karu, Abuja.

Ms. Akinjide, who was represented by the Secretary of Agriculture and Rural Development Secretariat, Olvadi Madayi, said the new policy is part of measures to ensure wholesome meat consumption in the Nigerian capital.

The minister stated that the tricycle meat vans were to be used to convey meat to distances not more than 3km from the slaughter points while the four wheel meat vans would serve for meat haulage to longer distances.

“The internal coverings of the meat compartment of the vehicles are stainless steel sheets. The emphasis on stainless steel coverage is to ensure non-metal contamination of meat. This measure is in line with National Agency for Food and Drug Administration and Control, NAFDAC, standards,” Ms. Akinjide said.

The FCTA, she noted, viewed with disdain the existing way of meat transportation in rickety vehicles and motorcycles.

“The importance of consumption of hygiene food in improving the quality of life of the populace cannot be overemphasized. Meat, being a perishable produce, must be handled right or it may endanger the public health,” she stated.

The Minister also disclosed that the Abuja Administration had concluded arrangements with a private investor to build and operate an ultra modern abattoir in Tungan Maje.

She noted that the Abattoir would serve the Federal Capital City and also introduce meat processing and packaging in the territory.

“Lead Automobile Company Limited has been an important key player in the Meat Haulage Policy actualization. The company made a substantial input to the formulation of the policy,” Ms. Madayi said.

She blamed the lack of alternative means of meat transportation for the shortcoming in addressing early, the meat haulage challenge.

DPR says it can’t function because of inadequate funding, under-staffing