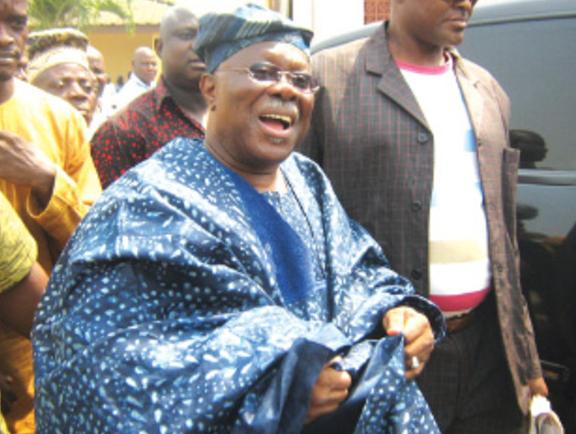 The former Deputy National Chairman of PDP, who was sent to jail for mismanaging funds belonging to the Nigeria Ports Authority, said “Nigerian patriots” should raise their voices for collective good of Nigeria and give the needed support to the President to succeed.

Bode George made his calls when he spoke in a lecture at the late Herbert Macaulay Annual Lecture series on Saturday in Lagos.

“Every patriot must stand with President Goodluck Jonathan in this difficult period of the nation’s life,” Mr. George said in the lecture titled “Nigeria, the Search for Collective Sacrifice.’’

“We must not intimidate or harass a well-meaning, hyper-challenged national leadership simply because it is the fanciful thing to do.

“As a good patriot, I stand firmly with President Goodluck Jonathan as he grapples with the difficult challenges of governing a highly complex society like our own.”

Mr. George argued that the President has a formidable assignment and cannot be perfect.

Bode George also used the opportunity to express his dissatisfaction with the new Lagos Traffic Law. He condemned the new Lagos State Traffic Law, insisting that it should be immediately scrapped.

Mr. George noted that some of the roads where the commercial motorbikes were recently restricted in Lagos were federal roads, “so, the Lagos government has no legislative control on such federal government freeways.

“The restriction, therefore, is a pure legislative anomaly,” the ex-convict who is also an active Lagos politician said.

Why I refused to compromise on our committee’s report — Ribadu