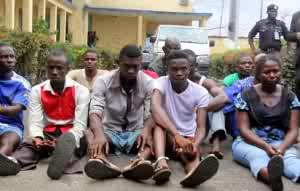 Thirteen suspects involved in the brutal killings of four University of Port Harcourt, UNIPORT, students were on Wednesday charged on a five-count charge of conspiracy and murder at the Magistrate in Port Harcourt.

The suspects were earlier paraded on Tuesday by the Rivers State police command for lynching Ugonna Obuzor, Toku Lloyd, Chiadika Biringa, and Tekenah Erikena, all students of UNIPORT.

Some of the suspects who spoke during the parade claimed four police officers were at the scene before the student were brutally murdered.

David Ugbaje, said one of the police officers joined the mob in beating the students as another pleaded for their release.

He added that he, with the help of other neigbhours,  had to push the mob away from his compound in Coca Cola street when they marched the students to confirm if they came to the said compound to visit Bright, also a tenant who was said to have owed one of the students some money.

He said Bright was not at home at the time..

Mr. Ugbaje also agreed to hitting one of the boys twice and another once.

Another suspect, Ikechuckwu Louis Amadi, also said police officers were at the scene before the student were murdered.

Lawal segun, a taxi driver, said he was not involved in the beating and murder claiming he actually begged the mob to stop the beating.

He said his claims could be confirmed from the video clip, as he was on a blue polo shirt that day begging for the release of the students, and only left the scene immediately the police left.

Sergent Lucky Orji, a police officer who was confirmed to have participated in the killings, was dismissed from police on Tuesday and arraigned in court with other suspects.

They were in handcuffs  as they were driven into the court premises at about 9:45 a.m. in a Toyota Hiace bus with registration number FG 120 F50.

Magistrate Emmanuel Woke however ruled that the court has no jurisdiction to hear the matter and asked the department of public prosecution to transfer the matter to a High Court.

He thereafter adjourned the case to December 20 while the suspects are to be remanded in prison custody.

The charges against the suspects, as contained in Charge Sheet Number PMC/2009C/2012, reads in part, “That you conspired among yourselves to commit felony to wit: murder and thereby committed an offence punishable under Section 324 of the criminal code Cap 37 laws of Rivers State of Nigeria 1999.”