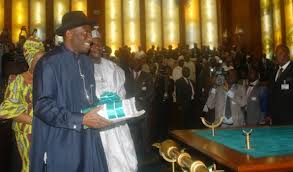 President Goodluck Jonathan laying the 2013 budget before the National Assembly

Recurrent expenditure will cost N2.41 trillion while N1.54 trillion will be spent on capital projects for 2013.

President Goodluck Jonathan presented a federal spending plan of N4.92 trillion for 2013 to a joint session of the Nation Assembly, Wednesday, announcing a relative raise of five per cent over the 2012 budget.

Under the outlay, recurrent expenditure will cost N2.41 trillion while N1.54 trillion will be spent on developmental or capital projects.

The presentation, made on Wednesday morning, was the earliest ever for National budgets since 1999. The president said the new time-line underlines his administration’s commitment to a “new Nigeria.”

When approved, the implementation of the budget will commence from January 1, 2013 against past practices where implementations spilled into successive years, the president said. Such extensions affected the execution of the 2012 budget.

The president credited his administration with a robust economic performance, with growth at the end of second quarter reaching 6.28 per cent against forecast of 5.4 per cent. Past budgets have been dogged by implementation controversies and whether the National Assembly has the powers to make new additions during appropriation.

Senate president, David Mark, said it remained clear the lawmakers reserved such powers and warned that the National Assembly will deploy more its oversight powers for the 2013 budget “never like before.”

“We do not think the constitution intended to turn the National Assembly into a mere mechanical rubber stamp that rolls robotically past budget estimates,” Mr. Mark said.