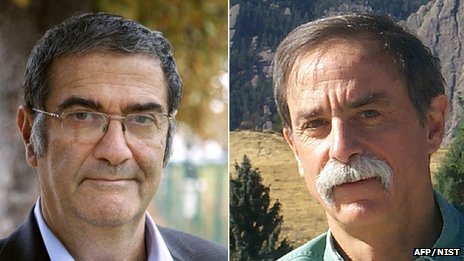 Two researchers, an American and a French, have won the 2012 Nobel Prize in physics for developing techniques for studying interactions between light and matter on the smallest scale.

The researchers, David Wineland, of the National Institute of Standards and Technology and the University of Colorado; and Serge Haroche, of the College de France in Paris, Ecole Normale Supérieure, shared 8 million Swedish krona, or about $1.2 million, and received their award in Stockholm on Tuesday.

The announcement was made on Tuesday and the two men were contacted.

Light and matter have photons and ions as their basic units, and studying them at the microscopic branch of physics called Quantum Mechanics, would have been unthinkable before the two physicists developed solutions to pick, manipulate and measure them individually.

Their work, the academy said, enables scientists to directly observe some of the most bizarre effects of quantum physics and have implication for quantum computers and super accurate clocks.

The award is the second in quantum optics in recent years, the other being a 2005 award for the theory behind “decoherence.”

Nobel prizes have been given out since 1901 in areas of medicine, chemistry, physics, literature, peace and economics.

The first ever physics award was for the discovery of the X-rays by Wilheim Roentgen of Germany. This year’s makes it 194th.

The prize in medicine was awarded on Monday while prize in chemistry will be awarded on Wednesday. The remaining awards will come later in the week.