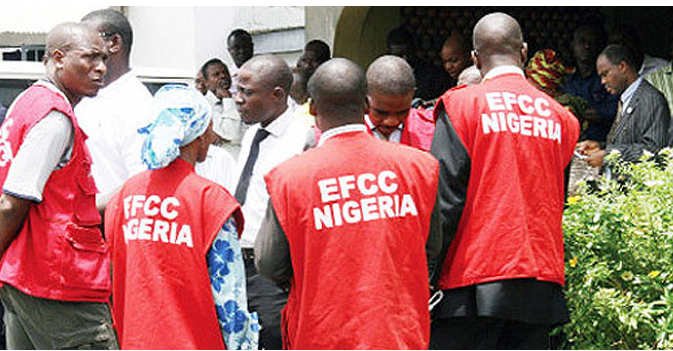 The EFCC officials have been sentenced to five years imprisonment.

Two officials of the Economic and Financial Crimes Commission, EFCC, Douglas William and Abba Ishaku, were on Thursday sentenced to five years imprisonment without an option of fine by an Abuja High Court.

The men were arraigned on a four-count charge of conspiracy and obtaining money under false pretence. Until their arrest, they were stationed at the reception of the commission’s headquarters in Wuse, Abuja.

The officers allegedly demanded for the sum of N100 thousand from one Kullima Kachalla, a former Chairman of Bama Local Government of Borno state, in 2010, by posing as investigators of the EFCC.

They were alleged to have asked Mr. Kachalla to send them the money in order to bribe other investigators of the Commission to destroy a petition written to the EFCC, which supposedly indicted the former chairman of alleged mismanagement of public funds.

During trial, the court presided over by Justice Abubakar Umar learnt that Mr. Kachalla had alerted the EFCC of the action of the two accused persons, necessitating an undercover operation.

An EFCC officer, posing as Mr. Kachalla’s representative, arranged a meeting with the accused persons. Mr. Ishaku, the second accused, called Mr. Kachalla by telephone, asking him to bring the money to the Commission’s office in Wuse, Abuja.

It was in the course of the receipt of the money that the two staff were arrested and subsequently arraigned before the court for the offence.

In his ruling on Thursday, Mr. Umar, said because the convicts have suffered enough humiliation, their sentence should commence from October 18, 2010, the date of their arraignment.

Port Harcourt-Enugu Expressway: A beauty to travel, By Emmanuel Obasi