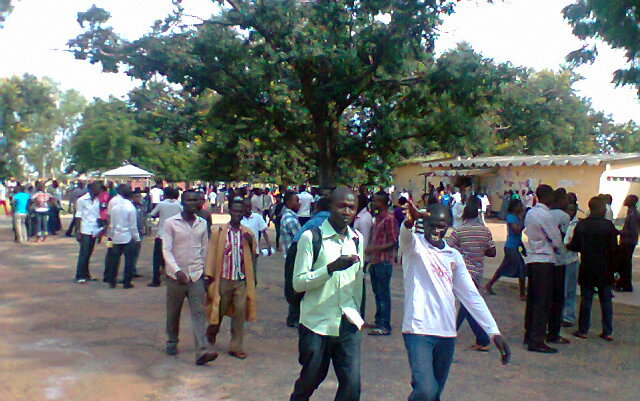 Mubi residents decry the attitude of the state and security agencies to the killing.

The Adamawa State Police Command has made some arrests in connection with the killing of over 40 people, many of them students in Mubi, Adamawa state.

The police spokesman, Muhammed Ibrahim, who announced this on Wednesday, also said some of the students were not shot but slaughtered.

“The police force headquarters will come out with more appropriate information about the incidence in due course,” Mr. Ibrahim said while refusing to say the number of persons arrested.

Mr. Ibrahim said the attackers might have known their victims personally because they identified them (the victims) before killing them.

“Some relatives of the slain students said the assailants of their sons called them out by name midnight of Monday before they were killed.

“Honestly there is insider in this killing because majority of the victims were slaughtered like goats while others were killed by gun shots,” the police spokesperson said.

Residents of Mubi, who would not want their names published for security reasons, have accused the state government and the police of a cover-up on the disaster.

An elderly resident told PREMIUM TIMES that the rumours that the killing were done by rival cult or student gangs were completely false.

“Everybody know that it is Boko Haram that carried out this attack. I don’t know why the Adamawa government is trying to paint a different picture,” he said.

Another resident questioned how any group of students would have dared violate the curfew, in the heavily militarized town, to carry out the attack.

“Everybody in Adamawa know that there is curfew between 3.00p.m. and 6.00.a.m. Nobody but Boko Haram dare go out within such time to commit such atrocities,” the Mubi resident said.

He questioned the efficiency of the security operatives saying since the attack lasted over one hour, with heavy gun shots heard by all, and within a curfew period, the men of the Joint Task Force could have stopped the attackers even if it was during the attack.

The Adamawa State Government had initially declared a 24-hour curfew in Mubi during which the JTF said they killed some and arrested several members of the Boko Haram group. The curfew was relaxed last Thursday from 24 hours to between 3.00p.m. and 6.00a.m.

It could be Boko Haram

In what seems a reaction to the allegations by the residents, the police spokesperson said the attack could have been carried out by members of the Boko Haram sect, cult groups, or politicians.

“Really we cannot rule out (the) possibility that the attacks may have been carried out by either the Boko Haram or a rival cult’s gang, or even some politicians but investigation will reveal the real perpetrators of the crimes,” he said.

Mr. Ibrahim explained that among those killed were students who recently won elections, which makes the police think the massacre might be in connection with outcome of the election.

“There was an election that took place at the Federal Polytechnic Mubi. A day after the election, winners were declared. There was killings and the parents of the killed students said that those that killed their children called them by name before they were massacred and the killing took place in six houses,” Mr. Ibrahim claimed.

He said that though there have been arrests, they (police) are not sure that the arrested persons are responsible for the dastardly act.
Mr. Ibrahim said the closure of the institution will not affect police investigations.While speaking on his reasons for not disclosing the number of arrested persons, the police spokesperson said “we don’t want to jeopardize our investigation till it is complete.”

The Adamawa statement
The Adamawa State Government has also issued a statement on the killings.
The Secretary to the Adamawa State Government, Kobis Thimnu, said in the statement that “four of those killed are students of the college of health Technology Mubi, seven other persons are members of federal polytechnic Mubi community of whom one is a student of the institution.”
Mr. Thimnu said 14 other citizens of the town lost their lives to the tragedy, adding that investigations are ongoing on the issue.