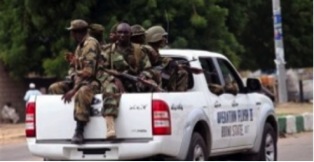 An Army spokesman has confirmed the death of two insurgents and the recovery of explosive devices in a raid on suspected terrorists.

At least two insurgents were killed by security operatives in Zaria, Kaduna State, in, early Sunday morning, raids on a suspected hideout of Boko Haram, the Nigerian Army has said.

According to Mr. Usman, “a combined team of Army and State Security Service (SSS) conducted a search operation at No 15 Ali Street, Gaskiya, Wusasa.”

Security agencies received an intelligence report about impending attacks and raided the house. The raid commenced on Saturday evening leading to a gun duel between the militants and security operatives that lasted most of the night.

Residents in the area said the explosion heard on Sunday morning could be a result of the detonation carried out by security personnel who tried to detonate the bombs found in the building. Mr. Usman confirmed that security operatives demolished the building.

Mr. Usman also confirmed that two suspected members of the Boko Haram sect were killed in the raid, while two AK 47 rifles were also recovered at the site. The Army spokesperson also said the building contained twenty 25-litre gallons of sulphuric acid. Other items discovered at the address included 10 bags of fertilizers, two rolls of detection cord as well as some primed improvised explosive devices, IEDs, in two drums.

He added that mobile phones recovered from the building have been handed to the SSS for further action.

Other buildings in the neighbourhood were also being searched, he said.

Jonathan to address the nation on October 1

Is Nigeria a toilet of a country? By Femi Fani-Kayode