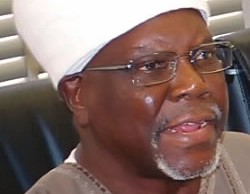 President Jonathan describes the late Mr. Adegbite as a bridge-builder who reached across ethnic and religious divides to promote peace and unity

Thousands of sympathisers are still gathered at the residence of the late Secretary-General of the Nigeria Supreme Council for Islamic Affairs, NSCIA, AbdulLateef Adegbite, waiting for his corpse to arrive for prompt burial.

Sympathizers, as early as 7a.m. on Saturday, trooped to the Onikilobo residence of the Mr. Adegbite, in Abeokuta, to register their condolences.

Mr. Adegbite died on Friday evening with the news spreading within the Abeokuta communities early on Saturday.

By 10.00a.m., arrangements had commenced for the deceased’s burial slated for his compound.

The deceased is to be buried according to Islamic rites beside the grave of his late wife, Modinatu Adegbite.

Sources within the state government say the state has resolved to foot a large percentage of the burial programme.

Security operatives were seen around the vicinity trying to maintain order, while one of the traffic lanes in Onikolobo has been closed.

Mr. Akintunde described the deceased as a distinguished Nigerian with profound dedicated public service. He added that the late Islamic leader was a defender and promoter of Islam, and motivator of youths.

A former Minister, Sarafa Ishola, in his condolence message said, ‘we have lost another illustrious son of Egbaland.

“The first President of MSS and unifying factor of the Muslim Ummah in Nigeria, we shall definitely miss you. You have left a vacuum which will be difficult to fill,” Mr. Ishola said in the condolence register.

“One by one the rank of those whose toils and sweats got Nigeria Independence and nurtured the nation is being depleted. His life was an admirable confluence of religion, tradition and civilization leaving indelible footprints in the sand of time,” the governor wrote.

“Dr Adegbite even in death is an embodiment of the pre-eminent positions of our state and its citizens in all spheres of life. What a loss! May Almighty Allah admit him into Aljannah Firdaus,” Mr. Amosun said.