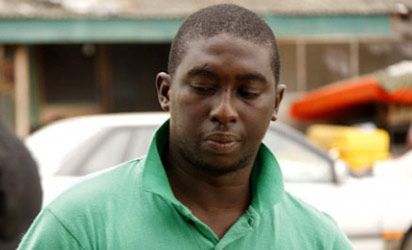 The accused is facing trial for allegedly killing his wife.
The trial of Akolade Arowolo, a resident of Lagos State who allegedly stabbed his wife, a banker, to death on June 24, faced a set back as a policeman scheduled to testify on Monday during the trial failed to appear.

The presiding judge, Lateefat Okunnu, of the Ikeja High Court, Lagos, threatened to issue a warrant of arrest against the policeman, Bayem Cletus, for allegedly impeding the trial of Mr. Arowolo.

The policeman was scheduled to continue his testimony on Monday but failed to appear in court.

The prosecutor, Olaide Eboda, informed the court that the witness had travelled to his village for the burial of his father.

Mr. Eboda assured the court that the police officer would return by October to continue his testimony, and asked for an adjournment.

The judge, however, expressed dissatisfaction with Mr. Cletus’ absence, noting that that was the second consecutive time he had stalled the trial.

“A police officer cannot continue to trifle with court fixtures and expects the court to vacate so many days in a criminal trial for his personal business,” Ms. Okunnu said.

“This is sheer disrespect for the institution of the court and no nation that wants to develop will condone this.

“If he does not appear in court on Friday to give testimony, I will disregard his earlier evidence. So get your next witness ready,” the judge told the prosecutor

She said she would issue a warrant of arrest against the policeman if he failed to appear on the next adjourned date, and advised the prosecutor to communicate same to him.

Ms. Okunnu then adjourned the matter to September 28 for Mr. Cletus to appear and continue his testimony.

The accused, Mr. Arowolo, allegedly killed his wife, Titilayo, at their residence at 8, Akindeinde Street, Isolo, Lagos, after a domestic dispute.