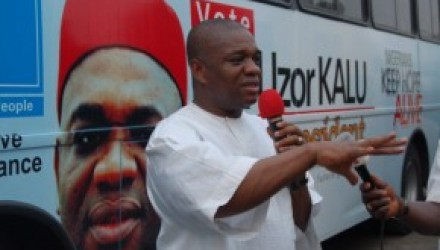 The  maverick former governor of Abia state, Orji Uzor Kalu, Thursday, crept into Ile Ife, the ancestral home of the Yoruba in Osun State, for a hush-hush meeting with the Ooni of Ife, Okunade Sijuwade, the main goal of which is to lobby the powerful monarch for his presumed 2015 presidential ambition.

In essence, Mr. Kalu has effectively flagged off the 2015 presidential race by throwing his hat into the ring three years to Election Day.

The meeting, held in the afternoon, saw the former governor arrive with at least 17 aides all dressed in black suit. The meeting was held at the Oba’s palace in Ile-Ife, Osun State. The Ooni of Ife is considered by many to be the number one traditional ruler among the Yoruba’s, one of Nigeria’s largest ethnic groups.

Mr. Kalu is the leader of a weakened People’s Progressive Alliance whose two governors coming out of the 2007 elections, Theodore Orji of Abia state, and Ikedi Ohakim of Imo defected to the People’s Democratic Party, PDP. The Abia governor was a former aide of Mr. Kalu, who he helped to win the 2007 elections. Both men fell out after which the governor decamped to the PDP, under whose platform he won his re-election in 2011.

Mr. Kalu told our palace source that the visit to the Oba’s palace was part of a wider consultation with traditional rulers across Nigeria, a preface to his formal declaration for the 2015 presidential election.

Mr. Kalu is apparently not relying on traditional rulers and political leaders alone for his yet-to-be-declared ambition. To court the social media community which is growing in political relevance in Nigeria, Mr. Kalu has built a sleek website which he intends to fully utilize, on his formal declaration of interest, for the election.

It is still unclear under which political party the former governor intends to run. Mr. Kalu has of late been oscillating between the ruling PDP and the opposition PPA, a party he helped formed but which has now been weakened by intense infighting and the former governor’s refusal to continue to fund it.

In 2007, Mr. Kalu, contested for president under his party, PPA, and lost. Though a successful businessman, the former governor relied on funds, anti- corruption officials claim, taken from Abia State accounts.

In the 2011 general election, he also contested his local constituency senatorial seat but lost to his estranged ally, Uche Chukwumerije, who defected to the PDP to win the seat.

Since leaving office in 2007, the pan-Igbo politician has been facing trial for corruption.

Shortly after leaving office in July 2007, the Economic and Financial Crimes Commission, EFCC, arraigned Mr. Kalu before an Abuja High Court on a 10-count charge bordering on money laundering, official corruption and diversion of public funds totaling over N5 billion.

The case is still in court.

His airline, Slok Air, later went under not long after the EFCC linked it to allegedly stolen Abia State funds.

In 2010, Mr. Kalu was questioned by the American police after a female friend died in his U.S home.

Soji Bamidele contributed to this report.