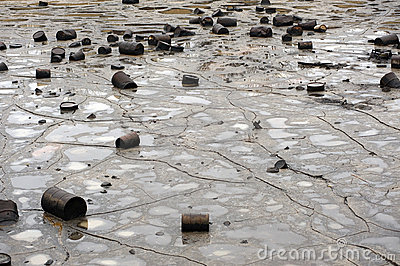 The structure of Nigeria’s political and governance process is such that existing environmental policies and institutions are not appropriately positioned to give the requisite leverage.
A Professor of Law, Olanrewaju Fagbohun, disclosed this during the fourth inaugural lecture of the Nigerian Institute of Advanced Legal Studies, NIALS, University of Lagos, on Wednesday.

“After more than two decades of various regulatory initiatives, accession to international treaties and countless environmental education programmes; Nigeria’s regime of environmental regulations has remained dysfunctional and afflicted with what I’ll call the ‘chaos theory’,” said Mr. Fagbohun, Head of Department at the NIALS School of Postgraduate Studies.

“Supposedly innovative strategies have either ended up as esoteric schemes that are hard to follow or were simply unable to stray beyond the rhetoric,” Mr. Fagbohun added.

The lecture titled ‘Mournful Remedies, Endless Conflicts and Inconsistencies in Nigeria’s Quest for Environmental Governance: Rethinking the Legal Possibilities for Sustainability’ provided an insight into the problem with the nation’s environmental agencies.

It also highlighted the issue of overlaps in the duties of the agencies as well as the shaky legal framework for the enforcement of environmental laws.

The lecturer noted that in a joint report by the World Health Organisation and UNICEF, Nigeria was ranked third on the list of countries with the largest population without access to improved drinking water, and where about 20 percent of the population practice open defecation.

“In the face of the above facts and realities, it cannot be denied that Nigeria’s efforts at ensuring sound environmental governance have led neither to effective environmental transformation nor to a better quality of life to her citizens,” Mr. Fagbohun said.

“While it can be argued that the number of instruments that have been churned out have contributed to slowing down environmental degradation, a stronger argument can be made premised on the above facts that they have not led to an improvement in the overall situation,” he added.

Mr. Fagbohun identified some of the reasons for the failure of environmental regulatory agencies as corruption within the agencies; preference for social affiliations above merit in the appointment of officials; irresponsible exercise of discretion by public functionaries; irrelevant and unending face-offs between regulatory agencies; and the unrealistic nature of some laws.

The professor of Law called for a decentralisation of environmental standards and regulations, especially as it relates to oil companies.

“Since the states are not directly involved in oil spills, oil pollution and the attendant gas flaring, it can be contended that there is a strong incentive for states directly affected to want to go for highly efficient standards,” Mr. Fagbohun said.

“Careful analysis will, however, reveal that in a number of situations, there are also externalities – costs and benefits that extend beyond local boundaries – which can give rise to the possibility of states putting in place conflicting and inconsistent standards.

“It is too facile and risky to assume that the inconsistencies, contradictions and conflicts in Nigeria’s environmental laws will go away. Far from it, real dangers lurk,” Mr. Fagbohun concluded.

What Is Inside That Can? By Akin Adesokan