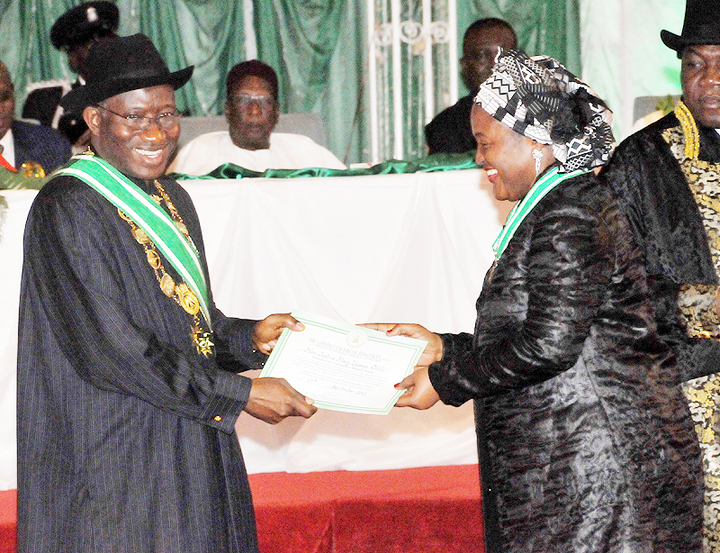 Since inception, the National Honours has been conferred on 4,424 persons.

President Goodluck Jonathan on Monday threatened to strip awardees, recently conferred with the 2012 National Honours, of their awards if found to be of questionable character.

The President said this while conferring the National Honours on 155 Nigerians from different sectors of the economy. Amongst the awardees is business mogul and Chairman of Globacom, one of Nigeria’s biggest telecomm company, Mike Adenuga. He bagged this year’s highest category – the Grand Commander of the Order of the Niger, GCON.

At the awards ceremony, the president said he will not hesitate to withdraw titles from people with questionable characters in keeping with the principle of ensuring that holders of the National Honours are truly worthy representatives of the nation’s value system.

“This is essential in ensuring that holders of National Honours are truly worthy representations of our national values and honour, and especially are patriotic Nigerians or real friends of Nigeria” he added.

The President described the National Honours award as the greatest a country can bestow on any citizen and called on the awardees to increase their commitments to the service of their fatherland.

According to him, “a National Honour carries with it a unique responsibility. While the honour recongnises your unique contributions to Nigeria, let me state that it is also a call for greater commitment and sacrifice for the furtherance of the development of our dear country”.

The Paralympics gold medalists were also awarded following the president’s promise at the reception held on Saturday in honor of the entire team.

Mike Adenuga, was the only recipient of the GCON.

The embattled Deputy Governor of Taraba State, Sani Danladi, had his name dropped from the list at the last minute.

Mr. Danladi who was listed for the award of Order of the Federal Republic, was believed to have fallen apart with his principal, Governor Danbaba Suntai and is currently facing impeachment in his state.

The governor was, however, honored with the title, Commander of the Order of the Niger, CON.

Two honourees, Justice Kayode Eso and Justice Andrews Obaseki, both retired, were absent at the event. A serving senator, Abdul Ningi, was also absent but represented by his wife.

The initial list of 149 was increased to 155 to include the six Paralympics gold medalists in the just concluded London 2012 Paralympics.

Speaking on behalf of the honourees, Justice Mary Odili thanked the committee for finding them worthy of being honoured. She promised that the honourees would work harder in their various fields of endeavour.

“Mr. President, words are inadequate to capture this moment. We are grateful for what has happened today. We appreciate what you have done. We are indeed grateful and cannot forget this moment,” she said.

At the event, the Secretary to the Government of the Federation, Pius Anyim, in his welcome address, said the National Award was informed by the need to recognise success, gallantry, honesty and exemplary character in the life of every nation.

The Award Committee, he said, worked tirelessly for two months to identify Nigerians who demonstrated exemplary contributions to national development and growth.

In his remarks, the former Chief Justice of the Federation and Chairman of the 2012 National Award Committee, Justice Alfa Belgore, congratulated the honourees for their achievement. He urged them to see the honours as a call to higher dedication to the nation.

Mr. Belgore stressed the need to allow peace reign in the country, saying our mission of becoming a great nation can only be achieved if we have more men and women living by example.

The Chairman enjoined Nigerians to rally round President Jonathan.

“Let every Nigerian re-dedicate himself to the service of this nation”, he said.

This year, no foreigner was conferred with any award but since inception, 208 foreigners have been awarded Nigeria’s National Honours.