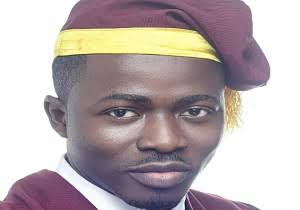 The guy who recently made a First Class in Psychology with the CGPA of 5.000 is a national treasure and should be treated as one.

In fact, he should be the main celebrity hugging the pages of our print media and the darling of our broadcast media houses now. For what is a country without academic avatars? What’s a country without philosopher kings and first rate thinkers?

It won’t be a bad idea if the Federal Government can bedeck him with a national honour of say the rank of MON, MFR or even an OFR. He deserves it. He has set a new bar. No one has ever done it before. It’s just like when our illustrious Kongi won the Nobel Prize for Literature in 1986. The whole world got to see the erudition in us. At least prior to that we were mostly seen as savages, hunter-gatherers and men with little intellect. Or even without, Africa being the heart of darkness. May Conrad find peace with his creator. I can only pray for him!

I read one of the interviews the genius granted. I was more than impressed with his responses and how he finally settled for Psychology after battling many contradictions from within and without.

From the world go, it was always Psychology for him, and nothing else. He was a guy in search of his identity until he finally got it after many draw backs.

Ayodele Dada belongs to a rare class of genius. I would really love to see him in Harvard or any other top school in the world where he can repeat the unusual feat he posted in UNILAG. If he could do it here, he would do it anywhere on the surface of the earth.

I hope our government or any of these top flying organisations in the private sector will pick up the guy now and help him actualise his other dreams that require material assistance. His breed is rare to come by.

PREMIUM TIMES REVIEW: Four matches you must watch this weekend

LETTER: Whose idea was “Change Begins With Me” campaign?