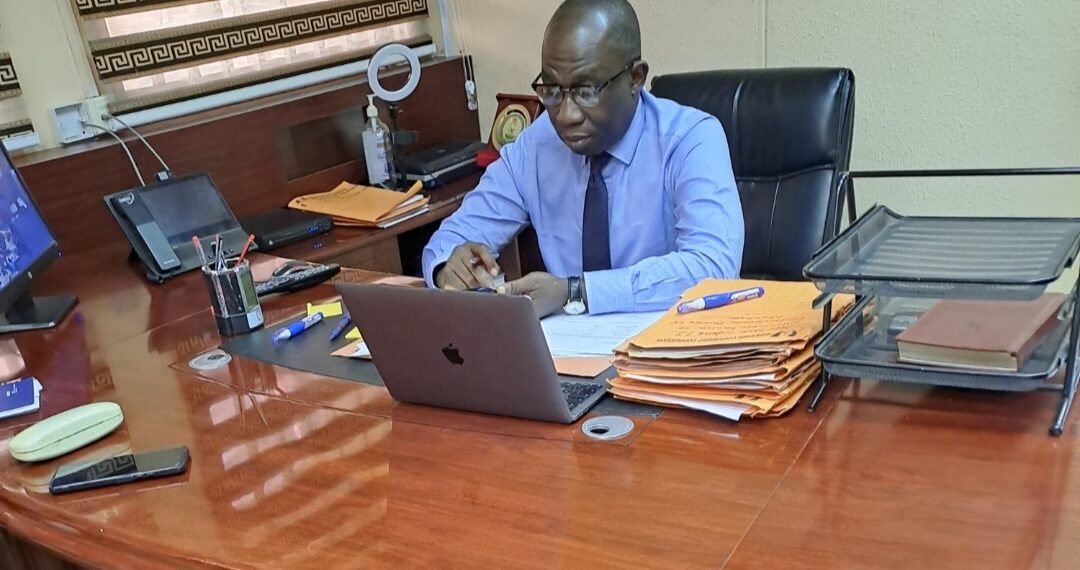 Difficulty in accessing books is said to be one of the main challenges facing people with visual impairment in Nigerian tertiary institutions.

Extant copyright laws in Nigeria prohibit the conversion of books to readable formats for visually impaired persons. This has resulted in limited access to books for people who are visually impaired and who live with print disabilities, resulting in a situation tagged “Book Famine”

Kassim Lawal is visually impaired. Against all odds, he bagged his law degree from the University of Lagos, Akoka in 2016. Afterwards, he enrolled and waded through the exerting waters of the Nigerian Law School, graduating in an enviable robe.

The journey for the 38-year-old lawyer, as expected, was herculean. The voluminous law books, the case notes and several large-volume materials whose reading came at a price for even sighted colleagues were all studied by him.

“I had to record all my textbooks with the assistance of my classmates,” he said. “It didn’t matter the volume of the books; I got them captured on tape recorders and cassettes to listen to them later on,” he told this reporter.

He noted that he couldn’t use braille because the materials were very bulky. He recalled soliciting the help of his sighted colleagues to use the library and submit assignments.

Now a solicitor at Yusuf O. Alli Chambers, Abuja, Mr Lawal acknowledged that visually impaired undergraduate students of Nigerian tertiary institutions go through extremely tough times studying, as compared to pupils at the basic and secondary school levels such as the Federal Capital Territory (FCT) School for the Blind.

Mr Lawal, who is the Chairman of the Abuja chapter of Lawyers with Disabilities, explained that universities in Nigeria are neither inclusive nor specialised.

“Provisions are usually made for primary and secondary school pupils in terms of adapting books unlike those at the tertiary level of education,” he said.

For Mr Lawal and numerous visually impaired students and professionals in Nigeria, the silver lining in the dark cloud would be Nigeria’s ratification, implementation and enforcement of Marrakesh Treaty- an international agreement that seeks to help end the global scarcity of books.

Grace Atewe is a current law student at the University of Lagos (UNILAG), Akoka, who, like Mr Lawal, holds so much optimism about the prospects of the Marrakesh Treaty coming fully into effect.

She shared her experiences navigating through university education with this reporter.

“Difficulty in accessing books for study is one of the main issues facing people with visual impairment in universities in Nigeria,” she said.

Miss Atewe, who is 27 years old, explained that a good number of law books and materials are available but only for sighted people.

“Getting access to those books and materials as a visually impaired or partially sighted person is a major hurdle. Most of the time, these books are not put into electronic formats that blind people can access.

“Like many of my other colleagues, we are at the mercy of our sighted friends and mates,” she said.

Miss Atewe, now in her final year in the university, suggested that when the Marrakesh Treaty comes fully into use, law reports and other materials can be made in formats that can “talk” or be read in braille. She said this would significantly ease their struggle.

She added: “We are the ones who do all the conversion of books ourselves. We have to get these books, then go through the rigorous process of converting them into readable formats and it takes a lot of time and money and as struggling students, we can hardly afford these.

“Getting those books in braille is extremely expensive, so all these hurdles should be looked into, so that when we want to get access to these materials, we can easily get them on the internet.”

According to an international development organisation, Sightsavers, there are estimated 24 million people with vision loss, with about 1.3 million becoming blind in the year 2020.

Blindness and lack of accessible book formats may be a factor why many visually impaired people in Nigeria do not go to school or drop out of school.

In Jigawa State, North-west Nigeria, 66 pupils formally registered at the Jigawa State School for the Blind but only 10 showed up for school, this is according to a report by PREMIUM TIMES.

In its World Disability Report published in 2011, the World Health Organisation identified inappropriate teaching materials and methods of assessment as one of the barriers to education for children with disabilities.

Studies have also revealed that braille is the most preferred source of information for persons with visual impairments with about 58.3 per cent level of interest, followed by talking books (audiobooks) with about 38.2 per cent while only 3.4 per cent source their information from large print.

The treaty has been ratified by 23 African countries and Nigeria is a signatory to it.

A direct response to the call of the (Sustainable Development Goals) of leaving no one behind, Marrakesh Treaty seeks to reach those furthest behind first as it acknowledges that one of the factors that consistently recur when talking about quality education for people with disabilities, particularly those with visual impairment, is the availability of educational materials in formats they can use.

However, It is important to note that some alternate formats mentioned above may be suitable or easy to use for a particular disability only. For example, a person with Dyslexia may not prefer a book in Braille, and persons with low vision may not use an audiobook as it omits all pictures and text.

What Marakesh Treaty domestication could mean to Nigeria’s blind community

John Assein, the Director General of the Nigerian Copyrights Commission, said the process of ratifying the Marrakesh Treaty in Nigeria has now passed the concurrence stage and that it has reached the Presidential Assent stage which is the final stage before it finally becomes law and binding.

Speaking to the reporter in his office, Mr Assign said he has been having a series of meetings with the leadership of the National Association of the Blind and other requisite organisations to ensure they are carried along.

He said the domestication of the treaty would mean more books in accessible formats, and that the needs of persons with visual impairments would be addressed, helping to significantly increase the literacy level of blind persons.

“People with visual impairment can also walk into any of the authorised entities instead of waiting for years to have some of these books in accessible formats. So it would seem like a sighted person walking into a regular bookshop,” he said.

He added that the provisions of the treaty have been incorporated into the revised Copyrights Amendment Bill which has been passed by both chambers of the National Assembly and awaiting presidential assent.

“We are hopeful that before the year runs out or before the end of this current administration, it comes into effect,” Mr Assien said.

According to the Marrakesh Treaty Advocacy Course, the right to literacy is a fundamental human right for all persons and it should include reading books for education and leisure.

But Mr Lawal, who is also the Secretary General of the Joint Association of Persons with Disabilities, Abuja chapter, said the current situation does not encourage visually impaired persons in Nigeria to read for leisure.

He said: “The domestication would mean that I can go to get literature books by Soyinka or Achebe. It would mean I don’t have to get the books first, go to Lagos to get it braille. There would be a level playing for visual impairments. For a person with disabilities to be able to access books the same way sighted people would be able to access it.”

Findings revealed that the bill provides for authorised entities which can either be government-owned or private establishments will be licenced to produce these books in accessible formats.

Meanwhile, Martin Kieti, who works at the Inclusion Resources for Africa in Kenya, noted that the ratification of the Marrakesh Treaty and its implementation in national law does not necessarily guarantee the enjoyment of the right to read by people with print disabilities.

He said: “It is a well-known fact that, in many African countries, international treaties have been ratified and national laws have been enacted or revised and policies have been developed but their implementation has always not been fully realised.

He said for people with print disabilities to enjoy their right-to-read and to access information through increased availability of accessible books, it is essential that the Marrakesh Treaty is realised not only on paper but also in practice.