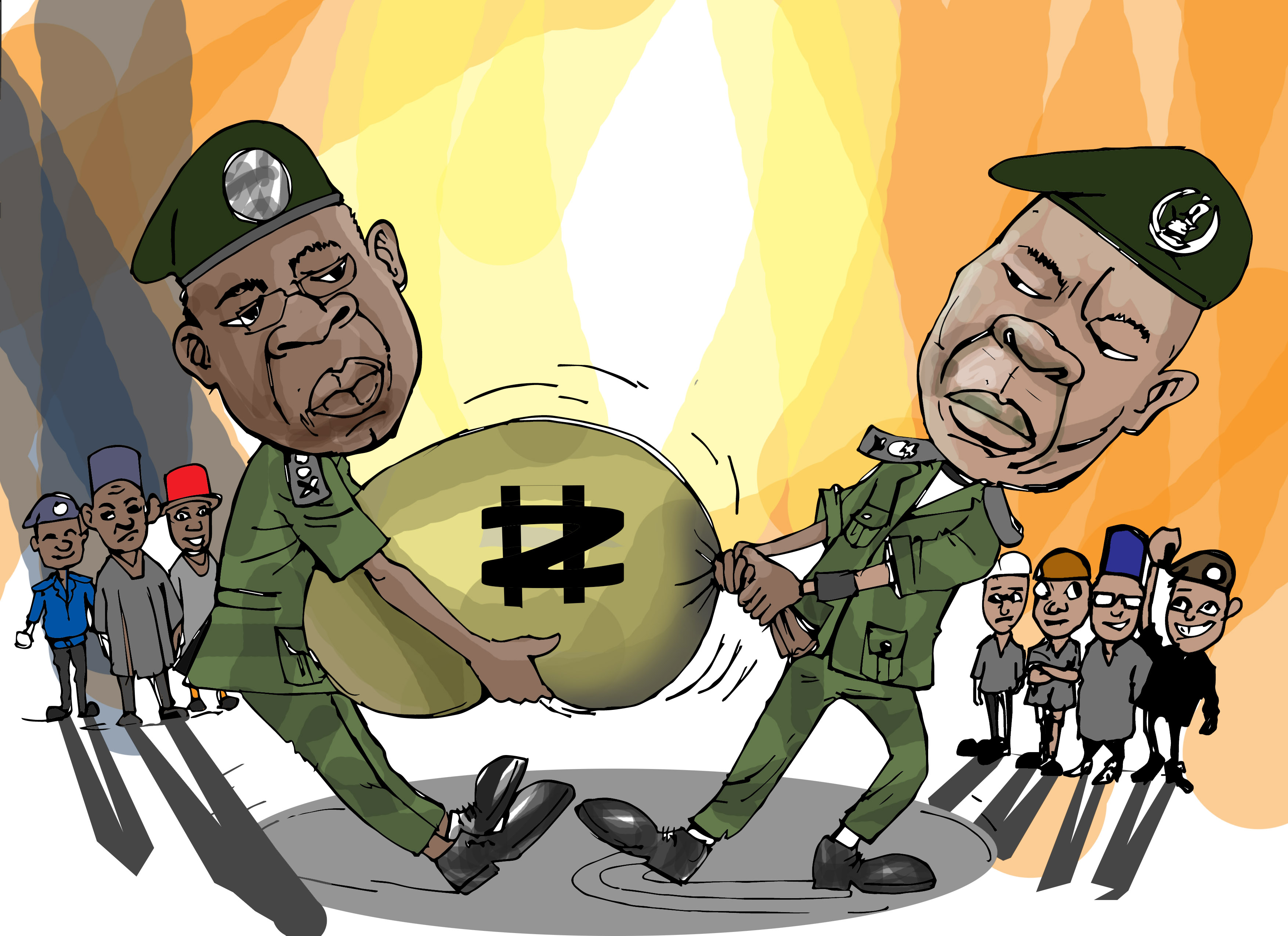 The National Security Adviser, Andrew Azazi, was visiting some friends and government colleagues in Abuja that night in early 2012.

He was shocked to learn from one of his hosts that his Nigerian Defence Academy classmate and a junior colleague had dropped his name in a alleged plan to steal billions from government coffers without his consent.

He was understandably furious. And he immediately decided to block the deal and then deal with the man at the centre of the deal.

“He just decided on the spot to cancel the entire transaction and forbid anybody from it (buying the K38 boats),” Mr. Hassan, who was closed to Mr. Azazi at the time, recalled.

READ PART ONE OF THIS SERIES HERE

A shrewd and desperate contractor that he is, Mr. Hassan frantically begged the NSA to shift ground.

After prolonged appeal by the contractor, Mr. Azazi softened. A new plan was immediately hatched.

Rather than have Mr. Atawodi and PICOMSS buy the boats, Mr. Azazi offered to use his position as NSA to purchase the boats for the Nigerian army as “his contribution” to an organisation he served for decades and only recently retired from.

“This was a very good ending for me and very neat for Azazi who was no saint,” Mr. Hassan said.

Mr. Azazi died in December 2012. We were, therefore, unable to interview him for this story. Rather, we rely on the documented actions he took and stories his associates told us about the matter.

As NSA, Mr. Azazi did not radiate much honesty and transparency while in office.

In fact, shortly after leaving that office, he acquired properties running into billions of Naira, way above his total earnings as a military general combined with his national security adviser legal emoluments.

One of the strategies the then administration adopted in pacifying militants from the country’s troubled Niger Delta was the arbitrary awards of lucrative waterways security contracts worth billions of Naira to so-called repented warlords from the region.

Mr. Azazi, was directly in charge of implementing this programme.

In March 2012, one of such deals was signed – a vaguely worded $103 million (minimum value) contract to Global West Vessel Specialist Agency in which former Niger Delta militant warlord, Chief Government Ekpemukpolo (aka Tompolo), was believed to have interest.

His reward? Fifty (50) per cent of whatever revenue he collects after recouping his $103 million investment.

Some sources who spoke to PREMIUM TIMES on this story believe that perhaps if Mr. Atawodi had taken Mr. Azazi into confidence about the alleged plot to corner billions from the K38 deal, he perhaps would not object to the arrangement.

Like every other high-ranking government security official who transacted with Mr. Hassan on these boats, the NSA was also not interested in questioning the Israeli contractor, Mr. Sade over the initial failed contract, despite being the highest ranking security officer in the country at the time.

In 2012, after firming a new deal with the NSA, Mr. Hassan, the contractor, began to avoid Mr. Atawodi, his first prospect. He believed Mr. Azazi had access to more cash, and that he was even powerful enough to block the PICOMSS boss’ access to funds.

To keep his new deal with the NSA under wraps, he set up a clone of Hypertech UK Limited – the company he had earlier pushed forward in the deal with PICOMSS and TP Marine. He called it Hypertech (MR) Ltd. He also opened a new EcoBank account to receive funds.

The N118.2 million he received from Mr. Azazi was paid into that account.

But as hard as Mr. Hassan tried to conceal his new dalliance with Mr. Azazi, Mr. Atawodi soon found out. He felt betrayed and tried to fight back.

However, faced with an unfriendly higher authority, Mr. Atawodi’s fightback options were limited.

There were three loopholes in Mr. Hassan’s strategy which the PICOMSS officials tried to explore.

He did not own the company (Hypertech UK) he used in the contract with both TP Marine and PICOMSS.

He did not even sign the contract with PICOMSS. Mr. Mustapha, the Hypertech owner, did.

Secondly, the Israelis who introduced him to TP Marine had loaned him $500,000 which he said he used in securing his partnership with the boat manufacturing firm.

Thirdly, Mr. Hassan had misrepresented his relationship with Mr. Mustapha to some parties in the deal. He had described Mr. Mustapha as his “boy”, suggesting he was an employee, rather than the “owner” of the primary company in the deal.

Mr. Atawodi connected these dots and called for a meeting with the middlemen in Mr. Mustapha’s office.

At the meeting, Mr. Mustapha was told how Mr. Hassan had misrepresented him.

“When I got in touch with Rabiu (Mr. Hassan), Rabiu exploded,” Mr. Mustapha recalled. “He was mad at me, mad at them, mad at everyone. Then I just knew something was wrong.”

Participants at the meeting agreed to deal decisively with Mr. Hassan for double-dealing. Soon, the contractor was dealt blows from several directions, and events began to spin out of his control.

His first line of action was to establish authority over his company.

“I had to write officially to the NSA’s office with clear clarifications and attaching all my certificates,” he said.

Mr. Mustapha followed up with a letter to TP Marine stating that he remained the sole owner of the transacting company and demanding that the boats be supplied to him directly.

He also wrote officially to the Israeli middlemen demanding that they cease communication with Mr. Hassan.

Eventually, he reactivated Hypertech UK in London and changed the name to UK Hypertech Ltd.

M15 Consultants, the Israeli middlemen, followed with a lawsuit against Mr. Hassan in the Netherlands.

They claimed they had a significant interest in the boats through the $500,000 they loaned the contractor for down payment to TP Marine.

They, therefore, asked the court to place a lien on the boats until Mr. Hassan repays the loan.

Mr. Hassan did not cower in the face of the raging storm. Backed by the highest ranking security authority in the country, he was confident of victory.

He got an attorney in the Netherlands to defend himself while he began paying back the loans.

Mr. Hassan also made a second clone of Mustapha’s company and named it Hypertech (UK) Ltd.

In Mr. Hassan’s support, Mr. Azazi, the NSA, continued to lobby then President Jonathan to disband PICOMSS, a move aimed at knocking Mr. Atawodi out of contention for the boats, and out of employment. It was also conceived to yield an immediate victory for himself and Mr. Hassan.

In the peak of this titanic battle, then President Jonathan fired the NSA, Mr. Azazi.

The removal of General Azazi was a huge setback for Mr. Hassan. But he did not give up. He quickly started lobbying the new NSA, Sambo Dasuki.

An especially brilliant and articulate man, Mr. Hassan is capable of sweet-talking anyone into submission.

By less than three weeks after he assumed duties, Mr. Sambo had bowed to Mr. Hassan’s rhetorics and had, on July 19, 2012, paid him an additional N174.15 million for the boats.

It is not exactly clear why Mr. Dasuki paid Mr. Hassan for the contract without conducting due diligence.

However, things soon fell apart between the two men. What exactly led to that remained unclear. But in some correspondences with the contractor seen by this newspaper, the then NSA accused Mr. Hassan of influence-peddling and name-dropping.

In the Nigerian security contracting industry, it is commonplace for huge contracts to be awarded to companies backed by notable former or serving high-ranking government official or politicians.

In some cases, a call from the wife of the president or any other influential individual is enough to persuade a public servant to wave all due processes or amend the processes to unjustly favour even an unqualified contractor.

In this case, Mr. Hassan dropped the name of Aliyu Gusau, a retired army general. He claimed Mr. Gusau was a member of the board of his company.

Mr. Gusau was director-general of the defunct Nigeria Security Organization, now known as State Security Service. Between 1999 and 2006, he served as National Security Adviser. He was former President Jonathan’s last defence minister.

Even though a simple company search with the Corporate Affairs Commission could have helped Mr. Dasuki confirm the board structure of Mr. Hassan’s company, he opted to dole out cash first, and perhaps confirm later.

As indicated above, the appointment of Mr. Dasuki as NSA began as a good omen for Mr. Hassan.

But what started as an upswing soon turned sour after Mr. Atawodi launched a counter-lobby at Mr. Dasuki.

First, Mr. Dasuki slowed down his predecessor’s bid to wind down PICOMSS and began to show support for Mr. Atawodi group’s inflated contract.

TP Marine also began withdrawing support for Mr. Hassan, even though at this point, he had almost completed payments for the boats.

In no time, Mr. Hassan was fighting alone.

Mr. Hassan damned all consequences and broke an industry cardinal rule when he began blogging about the contract inflation.

He also petitioned the president and the Economic and Financial Crimes Commission.

The NSA did not like this. He responded aggressively.

Mr. Dasuki left office in 2015 after President Goodluck Jonathan lost the 2015 election. He has remained in illegal detention since December 2015, and is being prosecuted by the Economic and Financial Crimes Corruption for alleged mismanagement of billions meant for the purchase of arms.

Read details of his response to Mr. Hassan’s action in Part 5.