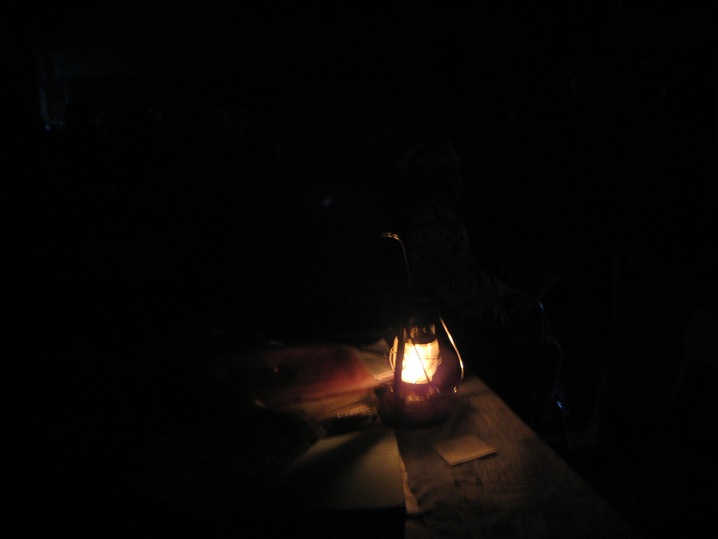 Lamp in Darkness used to illustrate the story

When the outdoor light bulbs along Kokumo Street in Alagutan area of Lagos State came alive on June 12, chaos erupted in the community. A street football game ended abruptly as the players, school-age kids who had stayed home because of the Public Holiday, raced to their houses. Some youth, gathered outside a one-storey building, began screaming at the top of their voices and, nearby, a group of commercial motorcyclists honked their horns in a wild celebration.

It was a delirious end to a power outage that had lasted 107 days after the community’s transformer broke down and was taken away for repairs.

“It is really a great relief after those depressing days and a harrowing experience,” said a visibly excited Ayodele Alade, an executive of the Alagutan Community Development Association.

While the residents blamed Ikeja Electric, IE, for the delay in fixing their transformer, the electricity company said several people in the community had accumulated debt in electricity bills.

Sylvester Ani, a resident of the community, said the hardship his family faced while the blackout lasted caused a deterioration in his health and wondered why an entire community should be punished because a few residents owed IE.

“I have faced untold hardship because the business my wife does is selling ice cream to children and that has crumbled because there’s no light and myself, I’m usually very hot and I can’t sleep without light,” said Mr. Ani, a member of the Electricity Committee representing Kokumo road.

“It has affected my health drastically. I know how much my family spends on fuel and diesel and the repair of our generators. We are spending a fortune whereas if we were using light we won’t spend as much as that, we are just retired personnel so it’s giving us a big problem of surviving.”

“I will attribute the debt to the IKEDC (Ikeja Distribution Company) officials or technicians themselves. When they are sent out to go and carry out disconnection, when they go to disconnect people that are owing them and they are given peanuts, they will leave those people not disconnected and we have discovered that. That has caused the accumulated bills which are being accrued to the community.”

Mr. Ayodele said the overpowering darkness at every nightfall rendered the community vulnerable to attack.

Fehintola Oluaina, who sells ice blocks, said she lost her customers to the prolonged power outage.

“The light affected me greatly, my business was paralysed, I used to sell ice blocks, and yoghurt and it has to be cold,” she said.

“I have generator but you can’t make profit using generator and since other people in the community have light so the customers just moved away from us.”

Azeez Wasiu, a chicken feed producer at Shotunde Street, said his business had taken a plunge.

“We haven’t been able to do anything, they are starving us, the work we are supposed to do here we have to take it outside to process, we spend money transporting it out and back again,” he said.

“Machines are here but since no light we can’t produce here, no small generator can work with my machine.

“They said some people were owing and some were not but is it not what you see you will pay for? That’s why people are not encouraged to pay, they are bringing bill of N13,000 for two small shops and they (shop owners) are paying N2,000 for rent of shop, how will they pay it?”

A trader at Shotunde Street, who identified herself as Mrs. Ogunsanya, said her customers, who are mostly the pregnant women, rarely came due to excessive heat inside her shop.

“It has really affected my sales because I could not stay in my shop because the heat was too much,” she said. 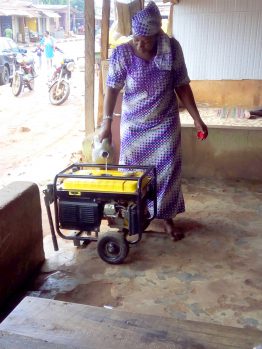 Oluwatoyin Aborinde, a tailor, said the electricity bills she gets at her shop are enormous.

“We didn’t see the light to use even when the transformer was here, ‘shebi’ it’s service that is rendered that we would pay for?

Afeez Alaran, the Assistant Secretary of the CDA, said the people who refused to pay their electricity bills was because it was overestimated.

“The issue of overestimated billing, they (IE) just bring bills without reading meters in the name of your meter is not working,” said Mr. Alaran, who represents Salami Street.

“You see some people using two rooms and they don’t even have equipment but you will see they will be given N48,000 for one month, you will see the accumulated bills of some houses of about N300,000 for a three-room bungalow.”

As the power outage crept into days, weeks, and then months, residents began to devise strategies to stay afloat the darkness.

Mr. Ayodele said he would take his clothes for ironing, on most mornings, to a neighbouring community before returning to prepare for his daily activities.

A frozen food seller at Shotunde Street, simply identified as Toba, said he couldn’t sustain his N7,000 weekly expenditure to fuel his generator; so, he’d take his goods to a cold room in the next street.

“Should I show you my spoilt goods?” he asked.

“I have to tell customers to wait while I go to bring my goods to sell, it’s terrible.”

Mr. Shotunde, who worked at the defunct National Electric Power Authority, recalled the struggles faced by the community in solving the electricity problem.

“When we didn’t have light, we had been to Ikeja Electric many times clamouring that they should return our transformer but they said we are owing and this money they say we are owing they cannot defend it because most of the bills are based on estimated bills,” said Mr. Shotunde, a member of the Electricity Committee representing Kokumo road.

“If they pick the reading of our meters, we pay low but when they bring estimated bills it’s three times what we are consuming and this is the money they say we are owing.

“When I was in service though it has been long, you don’t bring estimated billing for more than three months, it’s not done, but now they can bring it for 6 months, but when you ask them they say things are not as they are during our time.”

The chairman of the community’s Electricity Committee, who identified himself as Alhaji Ahmed, said the electricity company reneged on their promise to bring another transformer to the community.

“I’m hearing that our transformer is ready that they have repaired it which is not supposed to be like that, you know this transformer has back up I thought they should have brought another one to the place before they take that one away,” said Mr. Ahmed, also a former NEPA employee who represents Taiwo Street, said days before the electricity was restored.

“My generator has damaged my phone, now I have gotten another one. If I want to charge I had to go to a friend about four streets and sit for two hours to recharge.”

“Our agreement between us and IE is that they will suspend our account for those on the faulty transformer and they have not been bringing bills to us since February.”

Felix Ofulue, the Head of Corporate Communications Unit at IE, told PREMIUM TIMES that a lot of factors usually come into play when a transformer servicing a community breaks down.

“It will take the vendor a minimum of six weeks to fix. When the vendor finishes, he returns it back to us, then we run series of tests to certify that this transformer is in perfect condition then we send it back to the community and energise,” Mr. Ofulue said.

“But in cases where you have witnessed incessant rainfalls in the past one or 2 weeks that will affect the testing.”

“It’s not just to pay salaries to staff or service the other components of our agency, it’s part of the monies you get for infrastructural development and maintenance, when you pay money and the discos are buoyant they will buy a lot of transformers to replace as they come.

’Don’t forget that in the economy we have challenges, financially too it’s bound to happen, so we need these funds to be able to meet these demands, it’s very important. These said consumers attached to this Shotunde transformer owe N16 million naira and much more than this in some other communities; imagine what the N16 million will do for their community if they are paying.”

“The state of development under our network is the fastest anywhere in Nigeria, we have a vast network so we are moving towards, the idea is we will meter everybody”

On the issue of estimated billing, Mr. Ofulue said customers frequently assume that they are billed based on the number of hours they had electricity.

“I have also found out from my interactions with customers that they assume that it’s the number of hours that they get light for is what they consume but the question is what do you do with the light? Your consumption is not a function of how long you have light it is what load you use at the point you get the light.”

“The debt shouldn’t be an excuse because there’s always a payment plan but ensure you pay your current bill; then see your undertaking manager and discuss a payment plan no one is saying you should pay everything at once.”

He also advised members of the public to always interrogate landlords before moving into vacant apartments.

“We have a lot of campaigns that says if you are moving into a vacant apartment you must interrogate the landlord, if you know that that place has a lot of bills owed don’t move in and if you are going on holidays please go to our office and formally state you won’t be around.”