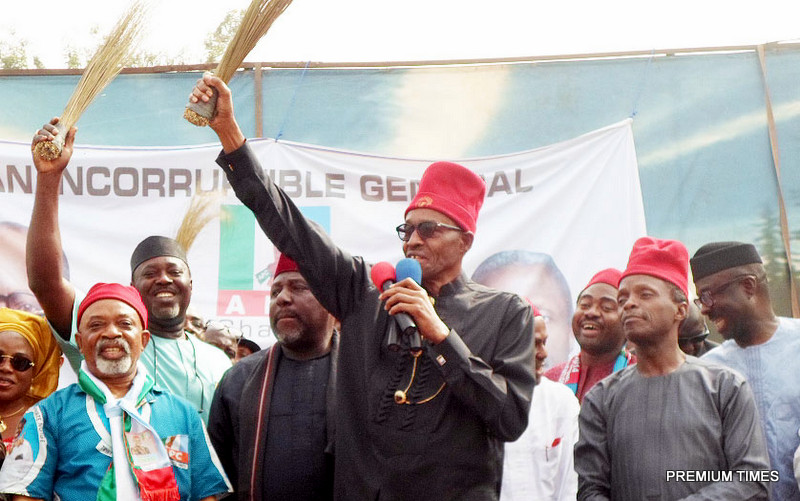 The claims by President Muhammadu Buhari and his party, the All Progressives Congress, that a key campaign document, “My Covenant With Nigerians” did not emerge from them is false and misleading, a PREMIUM TIMES investigation has shown.

Extensive checks by this newspaper showed that not only was the document circulated in the run-up to the April 11 presidential election by staff of Mr. Buhari’s campaign organization, the literature was also extensively promoted by party officials, including using the APC website to do so.

It was the Senior Special Assistant to the President on Media and Publicity, Garba Shehu, who kicked off the campaign of distancing the APC and Mr. Buhari from two of the key campaign documents that apparently swayed a lot of votes for the president and his party.

In a widely circulated opinion article published on August 28, Mr. Shehu wrote, “In the course of electioneering, the presidential campaign had so many centres of public communication which, for whatever reason, were on the loose.

“There is a certain document tagged ‘One Hundred Things Buhari Will Do in 100 Days’ and the other, ‘My Covenant With Nigerians’. Both pamphlets bore the authorized party logo but as the Director of Media and Communications in that campaign, I did not fund or authorize any of those. I can equally bet my last kobo that candidate Buhari did not see or authorize those publications.

“As a consequence of these publications, expectations have been raised unreasonably, that as President, Muhammadu Buhari will wave his hand and all the problems that the country faces- insecurity, corruption, unemployment, poor infrastructure – would go away.”

On Monday, the National Publicity Secretary for the APC, Lai Mohammed, picked the baton from where Mr. Shehu dropped it. Speaking during an interview with Channels Television, Mr. Mohammed said President Buhari and the party had nothing to do with any other campaign materials apart from the APC manifesto and constitution.

“Buhari never promised to do anything in 100 days, that’s the honest truth,” Mr. Mohammed. “You see, when you are running a campaign, all kinds of literature will emerge from all sorts of groups but there are only two documents that you can judge a party with: That is the constitution of the party and the manifesto of the party.

“Those are the only two documents that are registered with the Independent National Electoral Commission; you can go to court or hold a party accountable for them.”

Both officials spoke just as Nigerians began the countdown to Mr. Buhari’s first 100 days in office with conversations going on over whether the president and his party were on the path to delivering the “change” they promised. Mr. Buhari would be 100-day old in office on Saturday, September 5.

But investigations by this newspaper showed that by disowning the “My Covenant With Nigerians” document, President Buhari and his party were likely being dishonest and deceitful.

Mr. Fayemi could not be reached for comments Tuesday. His aides say he is travelling in Cote D’ivoire with Vice President Yemi Osinbajo.

Party insiders said the document, which harmonised promises contained in the party’s manifesto and various campaign speeches by Mr. Buhari and Vice President Yemi Osinbajo, was produced after rigorous and extensive deliberation with top campaign officials and the president himself.

After the president signed off on the final version of the covenant, insiders say, the document was emailed to journalists at the time by well-known campaign staff charged with circulating publicity materials for the organization during the period.

For instance, Egghead Odewale, who worked at the headquarters of the presidential campaign in Abuja, sent a PDF version of the document to PREMIUM TIMES on March 12.

Apparently concerned that the document was not getting enough publicity, another campaign official emailed a word version to reporters on March 16.

Newspapers and websites thereafter ran several stories on the document.

Vanguard’s version of the report, entitled “My contract with Nigeria – Buhari” was later republished by the APC on its website at 8:52 a.m on March 17.

The then Lagos governor, Babatunde Fashola, who was in charge of fundraising for the campaign, delivered a campaign speech on March 23, where he clearly referred to the document.

“The APC is proud to have as its flag-bearer, a patriot with the public stature and integrity of Gen. Muhammadu Buhari, who has unreservedly committed to this vision and mission as reflected in his Covenant with Nigerians and campaigns promises,” Mr. Fashola said at a meeting of APC governors at the Banquet Hall of the Imo State Government House, Owerri.

“It is not by accident that teeming millions of Nigerians are showing their support effusively for Gen. Buhari.”

PREMIUM TIMES can also report that “The Covenant With Nigeria” was also one of the documents the Ahmed Joda-led Transition Committee used in producing an 800-page report detailing swift steps Mr. Buhari must take to fix Nigeria.

The volume of the report that dealt with social issues repeatedly referred to the document now being disowned.

For instance, in a subsection on environment and climate change, the committee reminded the president of his promises as contained in “The Covenant With Nigerians”, and then proceeded to make recommendations.

Mr. Buhari accepted the committee’s report without any complaint, and promised to implement the recommendations.

But when contacted Tuesday, Mr. Shehu insisted the party and the campaign had no knowledge of the document.

He quoted the president as saying he would not engage in deception, and would never allow himself to be tagged with a document he had no knowledge of.

In signing off on the 16-page document, Mr. Buhari said in an introductory note, “This covenant is to outline my agenda for Nigeria and provide a bird’s eye view of how we intend to bring about the change that our country needs and deserves.

“The covenant is derived from the manifesto of my party, the All Progressives Congress. It however represents my pledge to you all when I become your president.”

Mr. Buhari now appeared challenged delivering on the promises contained in the covenant, and his team has been battling to disown the document.

For instance, the document quoted the then presidential candidate as promising to publicly declare his assets and liabilities while also encouraging his political appointees to do so. He is yet to fulfill that promise.